Wheat Prices Driven By Supply and Demand, Not Speculators

Over the last 5 years, wheat futures prices spiked and then crashed, similar to prices for other agricultural commodities. Since these commodities are critical food sources in the developed and developing world, this increased price volatility has drawn the attention of the public. At the same time, prices for agricultural and energy commodities moved together more than in the past. Explanations offered for this increasing price comovement include macroeconomic shocks and correlated supply disruptions, but observers also point to the influence of nontraditional speculative firms known as commodity index traders (CITs). Concern about the role of speculators in recent price spikes has led to calls for restrictions on the trading activity of CITs.

A new ERS study uses a statistical model to quantify the degree to which a comprehensive set of economic factors, including the trading behavior of CITs, contributed to recent trends in wheat futures prices. According to study findings, supply and demand shocks specific to the wheat market were the dominant cause of price spikes between 1991 and 2011 in the three U.S. wheat futures markets (hard red winter, hard red spring, and soft red winter wheat). Focusing specifically on the February 2008 price spike, researchers found that, depending on the market, wheat prices in that month would have been 40-62 percent lower in the absence of supply and demand shocks affecting that year’s wheat crop, such as weather events that lowered wheat yields. The second most important factor in the ‘08 spike was shocks to precautionary demand —an anticipatory buildup of commodity inventories associated with expectations about future prices. Wheat prices would have been 11-36 percent lower in the absence of these shocks.

Other factors had less of an impact on the 2008 price spike. Broad-based demand shocks associated with fluctuations in global economic activity had a 9- to 12-percent price impact. In the absence of shocks attributable to financial speculators like CITs, the peak wheat price in February 2008 would have been just 1 percent lower. At its maximum price impact between 2006 and 2011, financial speculation elevated wheat prices by 5-8 percent. These findings suggest that even in an environment of market-wide price volatility, wheat futures prices reflected fundamental supply and demand factors. In contrast, the price impact of commodity index traders was far smaller. Consequently, restrictions on commodity index trading are not likely to prevent future price spikes. 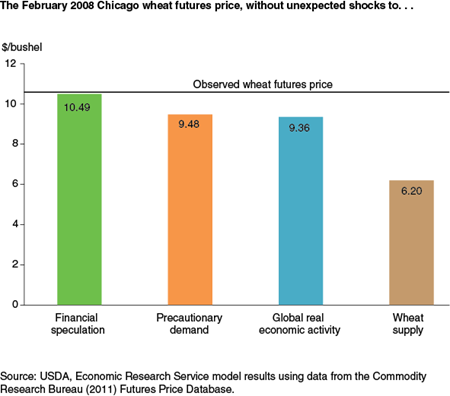