Food retailing in the United States has undergone major changes over the past few decades. Perhaps the most prominent of these changes has been the rise of the supercenter format. Supercenters are large stores that combine department stores with supermarkets, offering one-stop shopping for consumers. Wal-Mart entered the food industry with its first supercenter in 1988 and is now the largest food retailer in the United States. As of February 2014, there were 3,290 supercenters under the Wal-Mart banner alone, with hundreds of others operated by Target, Kmart, Meijer, and other retail chains. ERS researchers examined food purchasing decisions at conventional supermarkets and supercenters and found that U.S. households make significantly different food purchasing decisions at the two store types—differences that have implications for dietary quality.

ERS researchers used Nielsen Homescan purchase records for the years 1998 to 2006 to construct quarterly food shopping baskets for over 40,000 households. Shopping baskets were created separately for supermarkets and supercenters to examine how food purchases differ according to store format. To facilitate meaningful comparisons, the researchers organized the thousands of products sold by food retailers into broad categories and then calculated expenditure shares for these categories. The categories were selected with the key recommendations of the 2010 Dietary Guidelines for Americans in mind, as each category consists of foods that are generally recommended for either increased consumption (such as vegetables and whole grains) or limited consumption (such as higher fat meats and prepared foods high in fat or sodium).

Important differences between supermarket and supercenter shopping baskets emerged. Fruits and vegetables accounted for 6.6 and 7.3 percent of food spending, respectively, at supermarkets but 4.8 and 5 percent, respectively, at supercenters. If a family of four were to eat according to USDA’s Thrifty Food Plan (a minimal cost, nutritious diet), 46 percent of its food budget would go to fruits and vegetables, including 100 percent fruit juices. Commercially prepared foods constituted 45.1 percent of spending at supercenters and 37.3 percent of spending at supermarkets. Commercially prepared foods are a large and disparate category that contains sweet and savory snacks, frozen meals, and packaged side dishes. Most of the foods in this category are high in saturated fats, sodium, or added sugar and the Dietary Guidelines recommend limited consumption.

Researchers also looked at households’ total shopping baskets, recognizing that many consumers regularly purchase food from a variety of stores. The researchers compared households’ total expenditures across food categories with Thrifty Food Plan budget shares. They found that increases in supercenter market share in metropolitan areas are associated with slight decreases in the healthfulness of overall shopping baskets. 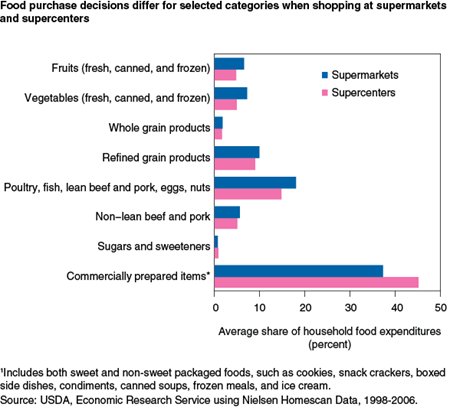 “The Effect of Supercenter-format Stores on the Healthfulness of Consumers’ Grocery Purchases”, in American Journal of Agricultural Economics, Vol. 95, No. 3, pp. 568-589, January 2013