Beginning Farmers and Ranchers and the Agricultural Act of 2014

Addressing Demographic Trends and a Need for Beginning Farmer Development

In the face of declining farming entrance, encouraging and supporting new farmers is a priority of the Agricultural Act of 2014. The Beginning Farmer and Rancher Development Program received a cumulative $100 million for 2014-2018 to provide funds, training, education, outreach, and technical assistance to beginning farmers and ranchers. This represents a continuation of the program established by the Food, Conservation, and Energy Act of 2008 and a 33-percent increase in its funding.

The Agricultural Act of 2014 also includes other provisions that could build and support new and growing markets. Beginning and socially disadvantaged farmers and ranchers who wish to enter value-added activities may find assistance from the Value-Added Agricultural Market Development Grants program. The program assists producers with creating new products and market opportunities, as well as expanding their market reach. In addition, proposed projects by beginning and socially disadvantaged farmers and ranchers, among certain other operators, are given priority. Funding for this program has been increased by $48 million and is now $63 million in total.

The Specialty Crop Block Grants program is available to help farmers become competitive producers of fruits, vegetables, tree nuts, dried fruits, horticulture, and nursery crops (including floriculture). Under the Farm Act, the program’s funding was increased to $72.5 million for each of fiscal years 2014-17 and $85 million per year thereafter. As a way of assisting engagement in local food markets, the Act expanded and renamed the Farmers' Market Promotion Program. The program, now known as the Farmers' Market and Local Food Promotion Program, assists farmers, including growers of specialty crops, with access to local food markets. The program’s scope has been expanded to include assistance to intermediaries—local and regional food enterprises that process, distribute, aggregate, store, and/or market locally or regionally produced food products.

Beginning farmers and ranchers may wish to operate organic farms or handle organic produce, and the 2014 Farm Act included increased support for organic agriculture. The National Organic Certification Cost-Share Program is available to assist with certification costs, and funding has more than doubled from the 2008 Farm Act’s mandate, to $57.5 million over the lifespan of the Act. Funding for organic research has also increased, and conservation practices related to organic production and transition continue to be eligible for payments under an Environmental Quality Incentives Program (EQIP) provision added in the 2008 Farm Act.

Together, these programs, in many cases expanded in terms of scope and available funding, may address obstacles that beginning farmers and ranchers face when establishing an operation, growing their farm businesses, and participating in local and regional food markets. 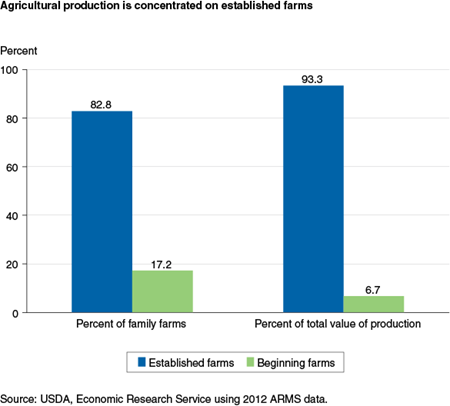 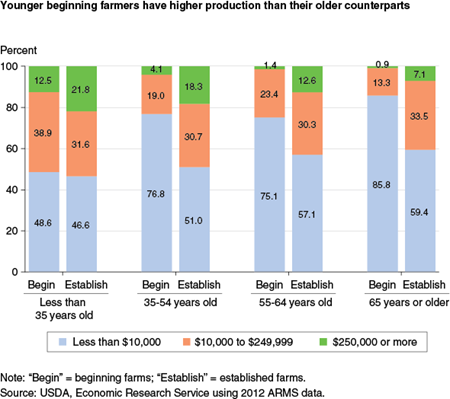 The U.S. Department of Agriculture’s Farm Service Agency (FSA) makes loans and loan guarantees to beginning farmers who are unable to obtain financing from commercial lenders. Each fiscal year, the Agency targets a portion of its direct and guaranteed farm ownership and operating loan funds to beginning farmers. In fiscal year (FY) 2012, FSA made 13,384 direct loans to beginning farmers for a total of $1.1 billion in obligations. Under previous FSA rules, a beginning farmer was an individual or entity who (1) has not operated a farm for more than 10 years (this applied to all entity members); (2) meets the loan eligibility requirements of the program to which he/she is applying; (3) substantially participates in the operation; and, (4) for farm ownership purposes, does not own a farm greater than 30 percent of the median-sized farm in the county. The 2014 Farm Act changes the ownership limitation in farm ownership loans by replacing the median acreage limit with a mean acreage limit. Although the mean acreage by county varies across the country, nationally in 2012 a farm was on average 384 acres, while the median size of a farm was 81 acres. Therefore, assuming the county’s distribution of farmland is similar to the national distribution, under the new definition, a beginning farmer could own a farm of up to 115 acres (30 percent of 384 acres) compared with the previous limit of 24 acres (30 percent of 81 acres). Researchers estimate that over 75 percent of beginning farms will meet the new ownership limitation criteria, whereas under the old definition, only about 38 percent met the criteria. As a result of substantially expanding the limit, more beginning farmers could qualify for FSA loan programs to finance farmland purchases.

Transitioning Farmland From Retiring Farmers to the Next Generation

The 2008 Farm Act established USDA’s Transition Incentive Program (TIP) to encourage enrolled Conservation Reserve Program (CRP) participants to transfer land coming back into production to beginning (or socially disadvantaged) farmers and ranchers engaged in sustainable practices. The 2014 Farm Act authorizes $33 million for TIP, up from $25 million authorized under the 2008 Farm Act. Enrolled CRP participants must be retired (or farmers or ranchers retiring within 1 year of their CRP contract’s expiration). Under TIP, these retiring farmers are eligible to receive an additional 2 years of CRP rental payments if they transfer their CRP acreage to a beginning farmer; $22.7 million was allocated under the 2008 Farm Act’s provisions, and CRP-TIP has 1,719 contracts enrolled or pending enrollment, covering 275,608 acres of land in 26 States. The increased authorization under the 2014 Farm Act could facilitate the transfer of land coming out of the CRP to beginning farmers as CRP acreage declines to satisfy the Act’s new lower CRP acreage cap.

Currently, beginning farms are less likely to participate in the Federal Crop Insurance Program. In 2011, beginning farms accounted for a significantly higher proportion of the total land in farms than their share of land enrolled in crop insurance. The 2014 Farm Act encourages beginning farmers and ranchers to purchase crop insurance by providing a 10-percentage-point reduction in their insurance premiums and exempting beginning farmers and ranchers from paying the $300 administrative fee for catastrophic-level policies. It also authorizes an increase from 60 to 80 percent of transitional yield (a yield established similar to the county yield used in the absence of verifiable, historical yield records) as a substitute for low actual yields (a yield below the guaranteed yield specified by the insurance contract) resulting from naturally occurring causes of loss such as drought or flooding. In contrast to much of the rest of the Farm Act, where beginning farmers are defined as those with less than 10 years of experience, for Federal Crop Insurance, a “beginning farmer or rancher” is defined as one having no more than 5 years of experience. Using Agricultural Resource Management Survey data from 2012, the Economic Research Service estimates that there are nearly 163,000 such farms that will qualify under the new definition, accounting for about 44 percent of beginning family farms. These new provisions should increase participation in Federal crop insurance and could offer beginning farms more income security to establish a foothold in the sector.

The Agricultural Act of 2014 continues and expands support for beginning farmers and ranchers. The Act addresses land access issues by reauthorizing and increasing funding for the Conservation Reserve Program Transition Incentives Program to assist retired or retiring farmers when they transfer land to certain farmers, including beginning farmers or ranchers. The new legislation builds on previous efforts to help beginning farmers get a foot-hold in the industry by increasing funding for the Beginning Farmer and Rancher Development Program, and importantly, helps them manage risk through new provisions that make Federal crop insurance more affordable. Finally, outreach to military veterans is improved by creating a special liaison in USDA to provide information to returning veterans about, and to connect returning veterans with, beginning farmer training programs.