The Chesapeake Bay is North America’s largest and most biologically diverse estuary. Its watershed covers 64,000 square miles across 6 States (Delaware, Maryland, New York, Pennsylvania, Virginia, and West Virginia) and the District of Columbia, and is home to more than 17 million people. For centuries, the Chesapeake Bay provided a rich bounty of crabs, shellfish, and fish, as well as high-quality recreational opportunities. However, as the region’s population grew and land was converted from forests to farms and urban development, the quality of the Bay’s waters declined along with many of its living resources. Since the 1970s, the Clean Water Act has facilitated significant reductions in polluting emissions from sewage treatment plants, factories, and other point sources of pollution, but continued heavy nutrient and sediment loadings from nonpoint sources such as agriculture, the atmosphere, and urban and suburban landscapes have contributed to low oxygen levels, algal blooms, decreased water clarity, loss of submerged aquatic vegetation, and declines in fish and shellfish populations. In 2010, only 38 percent of the Bay and its tidal tributaries met Clean Water Act standards for dissolved oxygen, and only 18 percent of tidal waters met or exceeded guidelines for water clarity. 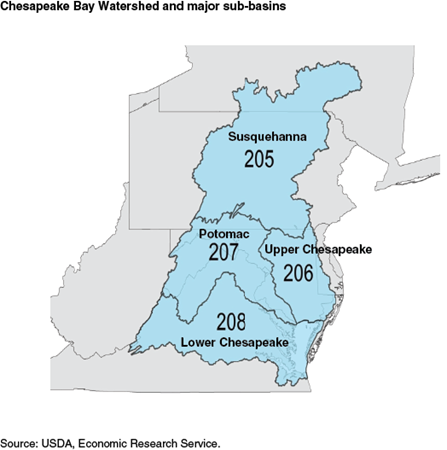 In 2010, the U.S. Environmental Protection Agency (EPA) established a “pollution diet” for the Bay, in the form of a Total Maximum Daily Load (TMDL). The TMDL sets limits for nitrogen, phosphorus, and sediment emissions across the Bay jurisdictions that are believed necessary to meet applicable water quality standards in the Bay and its tidal rivers and embayments. Meeting the emission limits requires basinwide reductions in nitrogen, phosphorus, and sediment of 25 percent, 24 percent, and 20 percent from 2009 loads, respectively. Because of agriculture’s significant share of pollutant contributions, meeting the TMDL goals will not be possible without reductions in agricultural nonpoint source pollution.

Agriculture in the Bay Watershed

Agriculture is an important part of the Chesapeake Bay watershed’s economy and culture. Cultivated cropland makes up about 10 percent of the Bay watershed. About half of the 84 thousand farms in the watershed raise only crops, while 42 percent are primarily livestock and poultry operations. These farms collectively produce over $9 billion annually in agricultural sales per year (based on the 2007 Census of Agriculture). According to EPA, agriculture also contributes about 38 percent of the Bay’s nitrogen loads, 45 percent of its phosphorus, and 60 percent of its sediment loads. While conservation measures taken by farmers in the watershed over the years are reducing pollutant losses from agricultural lands, the Watershed Implementation Plans developed by the Bay States to meet TMDL goals all set pollution reduction goals for agriculture that require the sector to do more.

One particularly difficult issue is what to do about confined animal operations. Poultry houses, dairies, and hog facilities tend to produce more manure than their farm’s cropland can use agronomically. As a result, there is a tendency to overapply manure nutrients to cropland, increasing the risk of nutrient losses to the environment. Compounding this problem is that confined animal operations tend to be concentrated geographically in the watershed, creating regional ”hot spots” of excess nutrients. As a result, the solution is not simply adopting better nutrient management practices on cropland. Achieving a farm-level balance of nutrients requires that excess manure be spread on more land, which may mean moving manure off the farm, or using it for other purposes.

Economically competitive farmers operate profit-seeking businesses, and they consider input and output prices and other costs and incentives as well as their resource base when making decisions about what mix of crops to grow and how to grow them. Traditionally, policies to reduce pollution from agriculture have relied almost exclusively on voluntary approaches, including education, technical assistance, and financial assistance. Voluntary decisions to adopt conservation measures that protect water quality, however, generally depend on private benefits outweighing private costs.

Policymakers can consider a range of policy instruments to influence farmer management decisions. These range from purely voluntary to regulatory and make use of various incentive and targeting mechanisms. No matter which approach is taken, achieving water quality goals at least cost to both farmers and to taxpayers is important, especially given limited conservation budgets.

Cost-effective control of nonpoint-source pollution must take into account the heterogeneity of agriculture by tailoring environmental performance goals for different farms and regions to minimize abatement costs over the landscape (also known as allocative efficiency). A large body of research has found that particular types of farms—because of their resource characteristics, farming practices, and/or geographic location—tend to contribute a disproportionate share of pollutants. A cost-effective policy induces operators who can most easily reduce pollution (often on the most highly polluting operations) to adopt appropriate conservation measures. However, assigning responsibility for nonpoint-source pollution is difficult. Runoff does not emanate from a single point, but leaves each field through multiple pathways, often unseen, so accurate monitoring is prohibitively expensive. The amount and nature of runoff from a field depend not only on factors that can be managed, such as the technology employed and the use of variable inputs, but also on factors such as rainfall that are difficult to predict.

Uncertainty about who is responsible and the degree of responsibility creates problems for efficient nonpoint-source policy design. Requiring farmers who are contributing little to the problem to adopt best management practices may reduce program cost-effectiveness. Similarly, not reaching those farmers who can provide the greatest reductions at the lowest cost also limits cost-effectiveness. The difficulty in identifying which producers are producing the most pollution is an often cited reason why voluntary actions are the tools of choice in existing nonpoint-source programs.

Using data from the Conservation Effects Assessment Project (CEAP), a collaborative effort of USDA's Natural Resources Conservation Service, Agricultural Research Service, and National Institute of Food and Agriculture; data on practice costs; and an optimization model; ERS researchers compared the relative cost-effectiveness of alternative policy instruments for reducing nitrogen, phosphorus, and sediment loadings from cropland to the tidal waters of the Chesapeake Bay by amounts consistent with TMDL goals. Only costs to producers were considered. Administrative and information costs of implementing the policies were not included in the analysis. As a result, the results are suggestive rather than definitive, but are nonetheless consistent with economic theory and previous research findings. Two broad approaches were considered; relatively untried performance-based policies that base incentives on the amount of pollution reduction actually achieved, and traditional practice-based policies that base incentives on the adoption of specific conservation measures.

Performance-based policies are a relatively new addition to the conservation toolbox. Basing payments on environmental performance, measured through monitoring or estimated with models, can benefit farmers who can provide the greatest pollution abatement for the least cost. The USDA Conservation Stewardship Program bases some of its payments on performance. Water quality trading programs that allow regulated sources of pollution to purchase offsets from unregulated sources are also performance-based (see “Agriculture and Water Quality Trading: Exploring the Possibilities” in Amber Waves, 2009). Most of the States in the watershed have developed trading programs, but most successful trades involve point-sources whose pollution discharges can be monitored. Field-scale process models can provide the ability to implement performance-based policies where actual monitoring is impractical (which is the case for nonpoint-source pollution). How well a model-based performance approach works in practice has not yet been demonstrated, as the accuracy and public acceptance of such models remain open to question.

The practice-based approach for pollution abatement is much more familiar to farmers. Adoption of water quality-enhancing conservation measures is encouraged under current conservation programs, including USDA’s Environmental Quality Incentives Program (EQIP), by providing financial and technical assistance. The same practices could be required through regulation, as has been done in some States. The major difference between the two approaches, from the farm operator’s perspective, is that performance-based policies let farmers decide how pollution will be reduced, while practice-based policies limit farmers’ management choices by encouraging or mandating adoption of a specific set of practices. In our analysis, we had available three representative management systems that farmers could adopt to address the Bay’s water quality concerns: cover crops, nutrient management, and water erosion controls. We found the following:

What to do about manure?

Animal operations in the Bay watershed produce roughly 99,400 tons of recoverable manure nitrogen and 44,200 tons of recoverable manure phosphorus annually, most of which is applied to available cropland on the source operation (see “Confined Livestock Operations Account For a Majority of the Chesapeake Bay Area’s Farmland With Applied Manure,” in the April 2014 issue of Amber Waves). However, confined animal feeding operations often produce far more manure nutrients than can be used by crops grown on the land managed by the operation. This has likely led to over-application of manure nutrients in areas of the watershed where animal production is concentrated and problematic arrangements for storage of surplus manure, with resulting nutrient losses to the environment. An estimated 17 percent of the nitrogen and 26 percent of the phosphorus entering the Bay has been attributed to animal operations. Merely requiring livestock operators to implement improved feed guidelines together with recommended manure storage and field-level management practices will not adequately address this nutrient imbalance. Much of the manure will have to be moved to cropland not currently receiving manure (replacing inorganic commercial fertilizer as a nutrient source) or be used for non-cropland purposes. 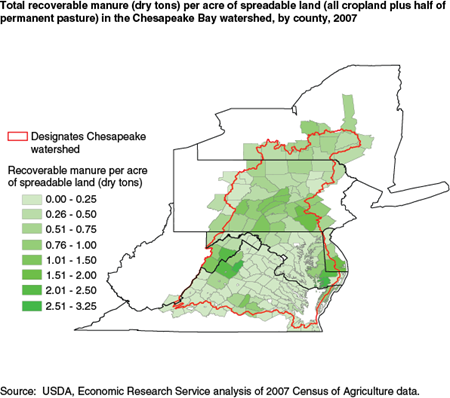 ERS researchers developed a manure transport model for the Chesapeake Bay watershed to estimate the cost of transporting excess manure off of confined animal operations, assuming that crops receive only agronomic amounts of manure nutrients (as would be required under a nutrient management plan). We found the following:

Implications for the Future

State programs for meeting the TMDL water quality goals are moving ahead. Public programs are providing (mostly) voluntary incentives to adopt particular practices. The cost-effectiveness of these traditional practice-based policies for reducing pollution to the Chesapeake Bay can be potentially improved through targeting. But the greatest opportunities may lie with performance-based approaches if they can be implemented in a way that accurately and inexpensively measures and attributes pollution reductions among nonpoint sources of nutrient pollution. Given the considerable cost savings that a performance-based approach would potentially provide, making use of available modeling tools and developing better ones to quantify environmental performance could provide significant payoffs. While the cost of developing, testing, and verifying model-based performance measures and gaining their acceptance among regulators, program participants, and the public has slowed their implementation, the research reported here provides a rough estimate of the potential benefit of doing so. Finding ways to reduce the modeling and transaction costs implicit in performance-based policy approaches could be a fruitful area for research.

Whether by using performance-based policies or through targeted practice-based policies, focusing management on those fields that can provide the most pollutant abatement at the least cost results in fewer total acres of farmland needing to be addressed and less treatment on those acres. This is particularly important in an era of constrained budgets for conservation, assuming it can be done without unduly increasing program administrative costs.

Increasing demand for manure as a nutrient source on cropland and potentially as an input for energy generation or other uses could help animal operations meet onsite nutrient management goals at lower cost. This may involve educating crop producers about the benefits of manure use and facilitating market exchanges of available manure supplies.