Antibiotics are frequently used to treat and prevent diseases in livestock. In addition to these medical uses, a substantial share of hog producers incorporate antimicrobial drugs into their livestock’s feed or water to promote feed efficiency and weight gain. Antibiotics can increase nutrient absorption, and hence feed efficiency, by suppressing the growth of gastrointestinal organisms that compete for nutrients. For many years, governmental and professional organizations have expressed concerns that the overuse of antimicrobial drugs in livestock production could promote the development of drug-resistant bacteria. Since many of the antibiotics commonly added to livestock feed and water are the same as or similar to drugs used in human health care, the development of antimicrobial-resistant organisms could present a serious threat to public health. In response to these concerns, in 2012 the U.S. Food and Drug Administration implemented a strategy to discourage the use of antibiotics for production purposes by asking the pharmaceutical industry to remove growth promotion from approved product uses and by requiring veterinary oversight for drugs used in food-producing animals. Recent ERS research estimates the potential implications for hog production from ending the use of antibiotics for growth promotion.

The research uses data from the 2009 USDA Agricultural Resource Management Survey of hog producers to estimate how antibiotics used for growth promotion affect farm productivity. The analysis focuses on feeder pig-to-finish operations— those farms that raise young pigs to market weight. To identify the effect of antibiotic use, the study compares the productivity of operations using antibiotics for growth promotion to those that don’t, controlling for input levels, operator and operation characteristics, farm production practices, and location.

Different samples and statistical models were used to estimate a range of effects. The results indicate that antibiotics used for growth promotion have a small positive effect on productivity. Holding feed, labor, capital and other inputs constant, antibiotics increased hog output by about 2 percent for the full sample of feeder-to-finish operations, and about 1percent for a matched sample, in which farms using antibiotics are matched to similar farms that did not use antibiotics. Ending the use of antibiotics for growth promotion would lower output of the approximately 46 percent of feeder-to-finish operations that currently use the practice. The resulting contraction in output could potentially cause hog prices to increase slightly. Since farmers receive about one-third of the retail value of pork, ending the use of antibiotics for growth promotion would result in increases in pork prices for consumers that are even smaller than the increases in hog prices at the producer level. 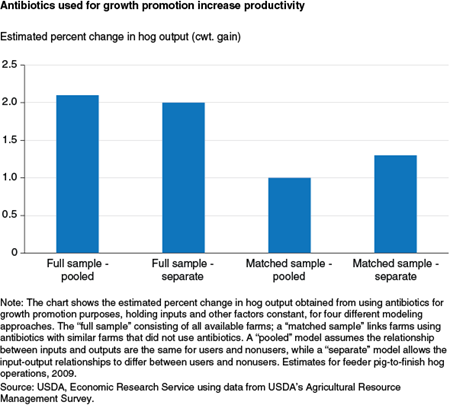