Despite gains in high school completion rates, rural (nonmetropolitan) areas continue to lag urban (metropolitan) areas in post-high school educational attainment. The most recent data from the U.S. Census Bureau’s 2008-2012 American Community Survey reveals that the share of the rural working-age population (adults ages 25-64) with a college degree or higher was 14 percentage points lower than in urban areas, and the rural-urban gap in the share of the adult population with a 4-year degree has grown by 2 percentage points since 2000.

Increasing college completion rates and attracting in-migrants with college degrees may be a challenge for many rural communities. Household incomes are lower in rural areas, which could be a barrier for rural students wishing to attend and complete college, especially from persistently poor areas. For rural people who do earn 4-year college degrees, urban areas offer higher earnings and a wider range of potential jobs than are typically available in rural areas. The result is that many rural youth who leave their community for college do not return.

The economic incentive to leave rural communities can be offset by family ties, natural amenities, or other perceived benefits to living in rural places. Also, several industries that depend heavily on a highly educated workforce, such as the education and health services sectors, are becoming major employers in many rural communities. Rural employment in the education and health services sector grew during the most recent recession and recovery period, even with a decline in public sector employment during the recovery period since June 2009. If this trend continues, growing demand for skilled labor in these industries could provide incentives for the large and growing share of rural people with some college education to complete their college degree, and for others to attend college. It could also draw in college-educated in-migrants to rural communities seeking jobs and scenic amenities. 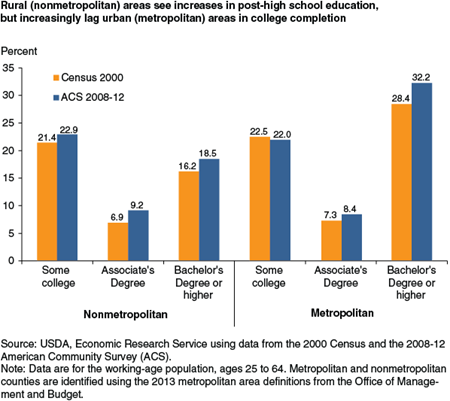