Returns to Organic Corn Production Were Higher Than Conventional in 2010

In 2010, total operating and ownership costs per acre (seed, fertilizer, chemicals, custom operations, fuel, repairs, interest, hired labor, capital recovery of machinery and equipment, taxes, and insurance) were not significantly different between organic and conventional corn. However, many of the individual cost components differed considerably, due to the nature of the inputs required for organic production. The costs for two major cost components, seed and fertilizer, are higher for conventional corn than for organic corn. Seed costs per acre are higher for conventional corn producers because they mostly use genetically modified seed, which costs more than the non-genetically modified seed used on organic corn acres. Since use of synthetic fertilizers is not allowed on organic acres, organic producers applied fewer pounds of fertilizers to their acres. With many chemicals not allowed on organic acres, organic producers had much lower chemical costs per acre.

In contrast, costs per acre related to the use of farm machinery and labor are lower on average for convention corn production. ARMS data show that conventional corn producers average slightly less than five trips across a field compared with more than eight for organic corn producers. Organic producers often use mechanical means to control weeds rather than chemicals, resulting in higher per acre expenses for fuel, repairs, capital recovery of machinery and equipment, and labor. 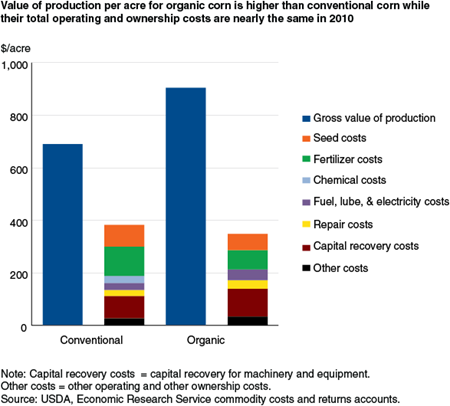