Production has shifted to larger farms in most agricultural commodity sectors over the last two decades. This consolidation has contributed to productivity growth in agriculture, leading to lower commodity and food prices and reducing total resource use in food and fiber production. As consolidation reduces the farm population, it also makes starting small and mid-sized farming operations more difficult. This is especially true for dairy farms, where a major transformation of the sector has reduced the number of dairy farms by nearly 60 percent over the past 20 years, even as total milk production increased by one-third. Recent results from the Census of Agriculture and the Agricultural Resource Management Survey (ARMS) detail how and why the structure of dairy production has changed. 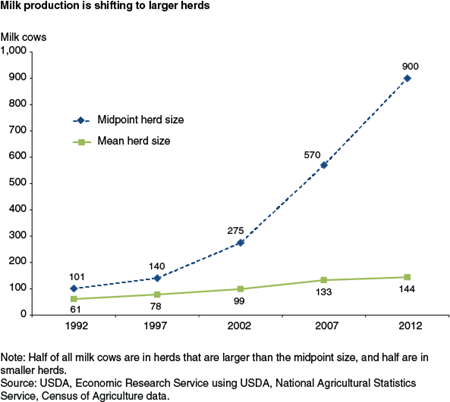 The shift to larger dairy farms is driven largely by the economics of dairy farming. Average costs of production, per hundredweight of milk produced, are lower in larger herds, and the differences are substantial. These costs include the estimated costs of the farm family’s labor as well as capital costs, in addition to the cash expenses that are included under operating costs. 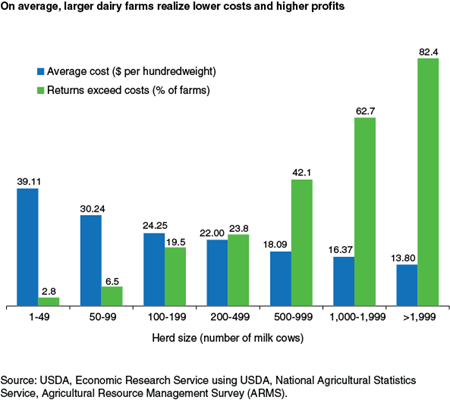 While some small farms earn profits and some large farms incur losses, financial performance is linked to herd size. Most of the largest dairy farms generate gross returns that exceed full costs, while most small and mid-size dairy farms do not earn enough to cover full costs. Full costs include annualized costs of capital as well as the cost of unpaid family labor (measured as what they could earn off the farm), in addition to cash operating expenses. The cost differences reflect differences in input use; on average, larger farms use less labor, capital, and feed per hundredweight of milk produced. These financial returns provide an impetus for structural change. 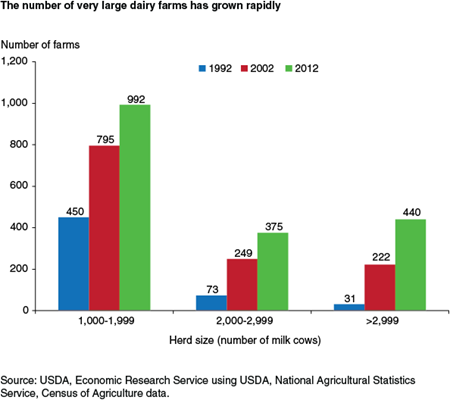 Some smaller dairy farms have found profitable niches through value-added activities like artisanal cheese production, agritourism, or the breeding and sale of high-quality calves. Some are also adapting innovations like robotic milkers that can reduce the labor required for milking by operators on small- and mid-size farms. Finally, some small farms can continue to operate for long periods of time without covering full costs, as long as their revenues are enough to cover cash expenses and provide an acceptable return to the farm family’s labor. However, if they don’t provide a return on capital, few people would be willing to reinvest in them or start new small dairies. The cost advantages of size remain quite substantial on average, and production is likely to continue to shift to very large dairy farms as older operators of small- and mid-size farms retire.