Participating in SNAP Is Associated With Less Time Spent Eating

Many of the low-income households participating in USDA’s Supplemental Nutrition Assistance Program (SNAP) struggle with time constraints related to work and child care. The share of SNAP-participating households with earnings has risen over the last 15 years from 24 percent to 31 percent in fiscal 2012, and single-parent households made up 57 percent of all SNAP households with children in fiscal 2012. A recent study by ERS and University of Minnesota researchers found a significant relationship between SNAP participation and time spent preparing and eating meals.

Researchers used 2004-2010 data from the Current Population Survey’s Food Security Supplement and the American Time Use Survey to estimate the relationship between SNAP participation and time spent cooking and eating (at home and away from home) by comparing time allocation of SNAP-participant households with similar low-income, non-participant households matched by income level, household size, race, urban/rural residence, and the respondent’s sex and employment status. 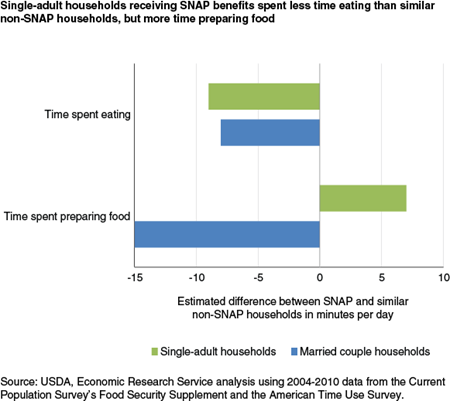