In the 2000s, natural gas production from shale formations increased tenfold in the United States, and growth in production has continued through 2013. This growth stems from innovations in two complementary technologies—hydraulic fracturing and horizontal drilling. Opponents of hydraulic fracturing cite environmental concerns such as groundwater contamination and air pollution. Proponents often highlight the benefit of natural gas extraction to local and State economies, but several studies have found that natural resource extraction is associated with lower long-term economic growth. Some studies suggest that a “natural resource curse” exists when activities by natural extractive industries cause other industries with more growth potential to shrink, perhaps by creating a local labor market less attractive to employers seeking a higher skilled workforce.

Researchers found that each billion cubic feet in natural gas production was associated with 18.5 additional local jobs, of which 7.5 were in the mining sector. Put differently, the number of non-mining jobs created was 1.4 times the number of mining jobs – a number commonly referred to as the employment multiplier. While some of the non-mining jobs are indirectly dependent on natural gas production, this multiplier effect prevents the local employment base from becoming highly concentrated in extractive industries.

Each billion cubic feet of natural gas production was also associated with about 25 additional people in the local population. On average, increases in gas production were associated with small decreases in the number of adults with less than a high school education, while the proportion of the population with a high school education increased, and the proportion with at least some college education stayed about the same. Combined, these statistics imply that natural gas extraction was associated with higher average educational attainment among the local adult population, with high school graduates replacing high school non-graduates. This could reflect the industry’s demand for semi-skilled labor. Higher housing rental rates due to population growth associated with increased drilling activity may have also caused lower income residents, who typically have less formal education, to move elsewhere. 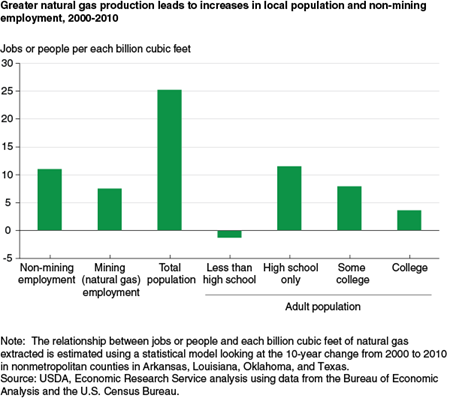 “A decade of natural gas development: The makings of a resource curse?”, in Resource and Energy Economics, pp. 168-183, August 2014