Imports of Many Fruits and Vegetables Dominated By Few Source Countries

Since 1990, per capita consumption of fresh fruits and vegetables has held steady, but the share of imports in U.S. consumption has increased, rising from 12 to 34 percent for fresh fruits (excluding bananas) and increasing from 10 to 34 percent for vegetables. Trade is thought to have played a major role in making a greater variety of produce items available outside the traditional U.S. growing season.

Despite the diversity of products available to U.S. consumers in modern food outlets, at any given time, the national sources of these products tend to be relatively concentrated among a few countries, with variability across commodities. One hypothesis is that this concentration is due in part to differing regulations limiting which countries can ship specific fresh goods to the U.S. market. However, recent ERS research focusing on 29 fresh fruits and vegetables finds that there is little correlation between source country concentration and regulatory treatment.

Under regulations governing fresh food imports, the USDA only permits fresh fruits and vegetables to be imported from countries which have demonstrated that they are free of potentially invasive and harmful foreign pests. In some cases, entry is only permitted if a treatment, such as fumigation or a hot water dip, is performed to mitigate the risk posed by a known pest. U.S. import markets for various fruits and vegetables tend to be dominated by only one or a few supplying countries, even when a substantially larger number of countries are approved to supply the U.S. market, and large trading countries tend to dominate certain commodities as import sources. Between 2006 and 2011, over 90 percent of strawberry, artichoke, peach, corn, and grape imports were supplied by either Mexico or Chile. To a lesser extent, pineapples, asparagus, and pear imports were dominated by Costa Rica, Peru, and Argentina. Moreover, because supplies are typically seasonal, these figures may understate the degree of source country concentration in any moment. For instance, Peruvian asparagus accounts for nearly the entire U.S. supply of asparagus between August and December, its prime importation period.

ERS researchers have found that source country concentration is largely uncorrelated with the number of approved import sources or the percentage of those sources requiring treatments. Some countries, such as Chile (for grapes) and Peru (for asparagus), are dominant suppliers to the U.S. market despite the fact that they are subject to mandatory fumigations as a condition of U.S. entry. Instead, concentration may better be explained as arising naturally from market forces including comparative advantage and specialization. 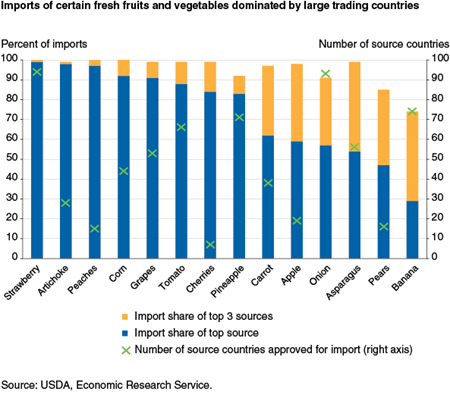