This 2.1-percent annual rise in retail food prices contrasts dramatically with the 1970s when the all-food Consumer Price Index (CPI) increased by an average of 8.1 percent per year, led by increases of 14.5 and 14.3 percent in 1973 and 1974. In the 1980s, the all-food CPI increased by an average of 4.6 percent per year—a steep reduction from the food price inflation of the 1970s. Throughout the 1990s and 2000s, the all-food CPI was comparatively stable, averaging between 2 and 3 percent inflation per year. Annual food price inflation has only exceeded 4.6 percent once since the end of the 1980s, in 2008.

The reasons for the long-term decrease in average food price inflation fall into two categories—factors that affected the overall economy and factors specific to the food and agricultural sector. Considering the U.S. economy as a whole, inflation for consumer goods, including food, was abnormally high almost across the board starting in 1973. This coincides with a major depreciation of the U.S. dollar that took place in the early 1970s and raised the cost of imported goods. At the same time, a sharp rise in fuel and energy prices resulted from global shortages in supply, which had ripple effects throughout the economy and took many years to abate.

In the food and agricultural sectors, major factors behind the decrease in food price inflation have included significant advancements in agricultural productivity and enhancement of global agricultural trade. Owing in large part to increased productivity, the inflation-adjusted price of agricultural commodities fell consistently and considerably during the 1980s and 1990s. For example, in constant U.S. dollars, the global farm price of soybeans fell by 29 percent from 1980 to 2002, and the global farm price for corn fell by 21 percent. Meanwhile, enhanced agricultural trade has allowed the U.S. food supply to better respond to supply shocks, which are most often the result of severe weather events, globally or domestically. 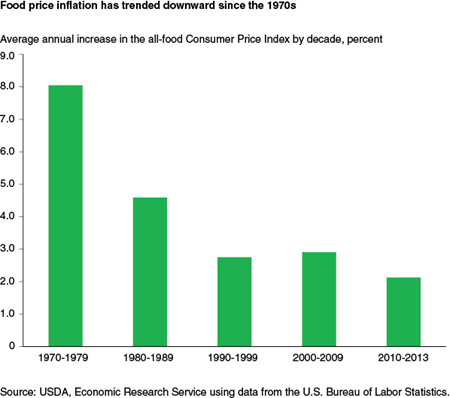