When Working Off the Farm, Farm Operators Most Commonly Work in Management and Professional Occupations

Little was known about the off-farm occupations of farm household members working off the farm prior to USDA’s 2010 Agricultural Resource Management Survey, which collected information on the topic. The survey used an occupation classification consistent with Bureau of Labor Statistics standards, classifying all off-farm occupations in one of five categories: management and professional; services; sales and office support; natural resources, construction, and maintenance; and production, transportation, and materials moving.

When working off-farm, 36 percent of farm operators and their spouses reported working in management and professional occupations. This share is much higher than that for nonmetropolitan area workers in general (25 percent) and is even higher than that for metropolitan area workers (32 percent). Among farm couples where the operator, spouse, or both reported working off-farm, operators of larger farms and their spouses reported the highest shares of employment in management and professional occupations, suggesting that many of them are able to apply the knowledge and skills used in managing a sizeable farm operation to other areas of employment.

The labor economics literature shows that the gap between wages for skilled and unskilled labor in the U.S. labor market has widened over time, particularly in the late 1990s and early 2000s. Looking forward, the evidence that the skills required to operate a successful farm business may also influence off-farm job opportunities suggests that as farm businesses continue to become more complex, the evolving skills and adaptability needed to operate larger farms may continue to bolster the off-farm income prospects of farm households. 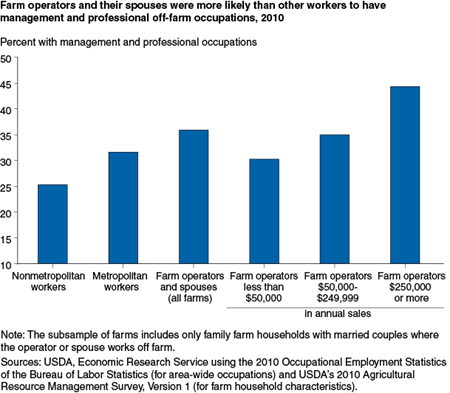