The Food and Agriculture Organization of the United Nations (FAO) projects that food production would need to rise 60 percent by midcentury to feed the 2 billion people expected to be added to the world’s population. FAO notes that while 85 percent of that increase would need to come from greater yields on existing land in production, incorporating new arable land is also necessary. Sub-Saharan Africa and Latin America are often pointed to as potential sources of that farmland expansion. Brazil’s successful agricultural transformation of its broad savannah, the Cerrado, which accounts for 24 percent of the country’s total area, is evident by a 192-percent rise in average production volumes of Cerrado farms between 1985 and 2006. By 2006, Brazil was the second-largest global producer of soybeans, with 49 percent of that production coming from the Cerrado. Such success has led to speculation that the world’s other savannah regions, including Sub-Saharan Africa’s vast Guinea Savannah, could become new breadbaskets.

ERS researchers used Brazilian agricultural census data (1985, 1995/6, 2006) and environmental (biome) rather than political boundaries to estimate the resource cost of agricultural production in a savannah of low nutrient quality. The Cerrado’s tropical soils, characterized by good physical structure but low fertility, high acidity, and being prone to degradation, are generally deficient in important nutrients such as nitrogen, phosphorus, and potassium. Improved management practices and new varieties of crops and pasture grasses developed by Brazilian research institutions were central to making highly productive agriculture possible in the Cerrado.

Findings indicate that average farms in the Cerrado achieved a total factor productivity (TFP—a measure of total output per total input) growth rate of less than 1 percent per year between 1985 and 2006, far less than the 4.3 percent achieved by the biome’s most-efficient farms. This productivity gap suggests considerable room for efficiency improvement (and continued output growth) for most farms in the region. Previous analysis of Brazilian agriculture found that public investments in adaptive agricultural research, rural credit, road infrastructure, and education facilitates greater adoption of technologies and management practices currently used by those farms operating on the technology frontier and further production growth.

Extending the successes of Brazil’s Cerrado “miracle” to other savannah regions of the world could help address the estimated need for a 60-percent rise in global food supplies by 2050. A lesson from the Cerrado is that such an extension would require not only locally adapted agricultural technologies but substantial applications of material inputs. Successful agricultural development of new arable lands may thus depend on the real prices of material inputs needed to maintain adequate plant growth under savannah conditions. 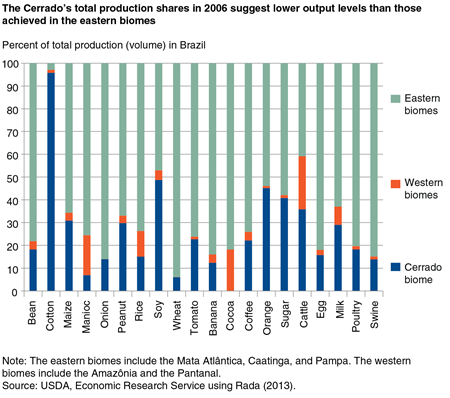