Americans Not Drinking Milk as Often as Their Parents Did

by Hayden Stewart and Diansheng Dong

Fluid milk has long been a staple of the American diet. However, as dietary habits change, Americans of all ages are drinking less milk, on average. Since 1970, per capita consumption of fluid milk has fallen from almost 1 cup (8 fl. oz.) to 0.6 cups per day. Contributing to the trend are differences in the eating and drinking habits of newer and older generations. Americans born in the 1970s, for example, drank less milk in their teens, twenties, and thirties than did Americans born in the 1960s at the same age points. Those born in the 1980s and 1990s, in turn, appear poised to drink even less milk in their adulthood than those born in the 1970s.

To study milk drinking by Americans over time and across generations, ERS researchers analyzed data from food consumption surveys conducted in 1977-78, 1989-91, 1994-96, 2003-04, and 2007-08. Individuals participating in these USDA-sponsored surveys reported their food and beverage consumption over a 24-hour period. The surveys reveal that portion size has been fairly steady over this time. Americans—on the occasions when they drink fluid milk—continue to consume about 1 cup.

These generational differences in the frequency of milk drinking are contributing to decreases in per capita consumption. Between the 1977-78 and 2007-08 surveys, children’s consumption of fluid milk declined from an average of 1.7 cups to 1.2 cups per day, and milk consumption by American teenagers and adults fell from 0.8 cups to 0.6 cups per day.

Several factors may account for variations in milk drinking habits across generations, including the food environment in which people come of age and a generation’s unique experiences as children. Every decade brings a wider selection of beverage choices at supermarkets, restaurants, and other food outlets. Soft drinks, sports drinks, bottled water, juice boxes, and other products increasingly compete with fluid milk to quench consumers’ thirst. 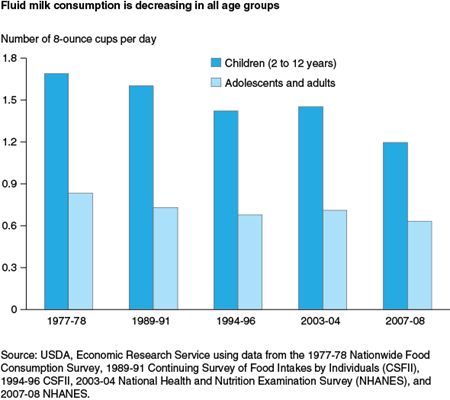 “Is Generational Change Contributing to the Decline in Fluid Milk Consumption?”, Journal of Agricultural and Resource Economics, Vol. 37: 435-454, December 2012