Summer Weather Most Important for Corn and Soybean Yields

Drought and high temperatures during the 2012 growing season affected many agricultural regions in the United States. For the third consecutive year, national average corn yields were below trend expectations due to weather. Similarly, weather pushed national average soybean yields below trend for the second year in a row. As a result, there is a renewed interest in the relationship between weather and yields for these crops.

To measure the impact of weather, ERS analysts developed statistical models for corn and soybean yields based on 25 years of historical data. The models build on simple trends and provide quantitative estimates of the effects of weather and other factors on crop yields.

The models include other growing-season weather variables important for determining corn and soybean yields, such as temperatures in July for corn and in July-August for soybeans. Hot weather can stress the crops while cooler conditions in those months can aid in crop development.

In most years, the effects of June weather are small relative to weather effects later in the summer. However, extreme weather deviations from normal in June can have large impacts, as happened in the major drought years of 2012 and 1988. To take that into account, both models include a measure of the shortfall from average June precipitation in years when that month was particularly dry.

The incorporation of weather variables helps explain historical yield variations and deviations from trend. Once the effects of those variables are measured, they can be netted out to derive weather-adjusted trend yield estimates. Long-term trends in yields reflect improvements in yield-enhancing technology (such as new hybrids) as well as improvement in production practices (such as better pest and nutrient management and precision planting). 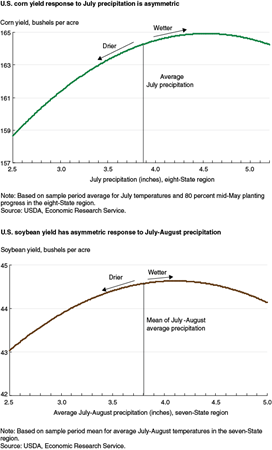