Effects of Changes in SNAP Benefits on Food Security

The food security of households participating in USDA’s Supplemental Nutrition Assistance Program (SNAP) improved from 2008 to 2009, coincident with higher SNAP benefits mandated by the American Recovery and Reinvestment Act of 2009 (ARRA—also known as the stimulus bill). From 2009 to 2011, however, the food security of SNAP households worsened as inflation reduced the buying power of the ARRA SNAP benefit increase by about half. The size of these changes provides a basis for estimating how future increases or decreases in SNAP benefits would affect the food security of SNAP recipients. Food security refers to a household’s ability to consistently obtain adequate food for healthy active lives for all household members.

The formulas for calculating SNAP benefits for eligible households remained constant except for annual inflation adjustments for almost two decades. Then, in April 2009, the passage of ARRA increased the maximum SNAP benefit by 13.6 percent. (Households with no income, net of allowable deductions, receive the maximum SNAP benefit—an amount that varies with household size.) Under the legislation, maximum benefits were to stay at the dollar amounts set by ARRA and not be adjusted for inflation until, over time, rising food prices would reduce, and eventually eliminate, the effects of the stimulus increase. Subsequent legislation ruled that benefit calculations would revert to the pre-ARRA formulas in November 2013. By 2011, food price inflation had cut the real value of the ARRA increase by about half.

Two ERS studies examined changes in the prevalence of very low food security, a severe range of food insecurity characterized by reduced food intake and disrupted eating patterns, during the periods of increasing and declining SNAP benefits. The percentage of SNAP-recipient households with food insecurity in this severe range declined from 2008 to 2009 following the ARRA-mandated benefit increase and then rose as inflation eroded the value of SNAP benefits. The percentage of SNAP households with very low food security increased from 12.1 percent in 2009 to 13.8 percent in 2011.

The changes in food security were proportionately similar in the two periods, which suggests that the associations reflect a cause-and-effect relationship. Similar changes were not seen in low-income households that did not participate in SNAP or in households with incomes not far above the eligibility range for the program. Taken together, results of the two studies suggest that increasing the maximum SNAP benefit by 10 percent ($69 per month for a family of four) would reduce the number of SNAP-recipient households with very low food security by about 22 percent, and reducing the maximum benefit by 10 percent would increase that number by about 29 percent. 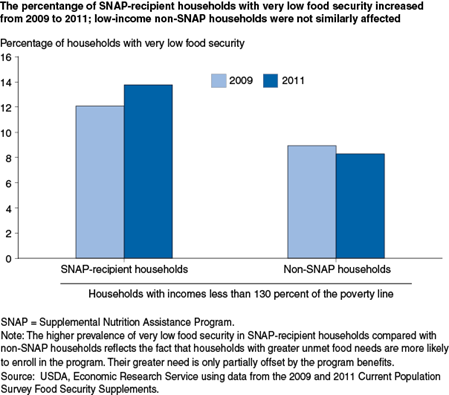