Estimates of the economic cost of foodborne illness play an important role in guiding food safety policy. Two 2012 studies of the cost of foodborne illness in the United States—one conducted by researchers from ERS and the University of Florida and the other by a researcher from Ohio State University—agree on which foodborne pathogens are the costliest in terms of medical care, lost time from work, and losses due to premature death. The studies find that Salmonella (nontyphoidal) and Toxoplasma gondii are the first and second costliest foodborne pathogens, followed by Listeria monocytogenes, Norovirus, and Campylobacter.

A number of factors account for the difference in cost estimates in the two studies. The studies consider different medical complications associated with foodborne illnesses and use different methods to place a value on lost pregnancies, neonatal deaths, and the lost productivity of parents taking time away from work to care for sick children.

Both the number and severity of illnesses affect the cost of a pathogen. Salmonella and Toxoplasma rank highest in cost because although they sicken fewer people than Norovirus, they cause the highest number of deaths each year. Norovirus ranks high because norovirus illness is the most common foodborne illness, even though the symptoms are generally mild and rarely require hospitalization. And though E. coli O157:H7 receives a great deal of attention from the news media and from policymakers, partly because it can have severe impacts on children, it accounts for only 2 percent of total illness costs attributed to the 14 major pathogens. 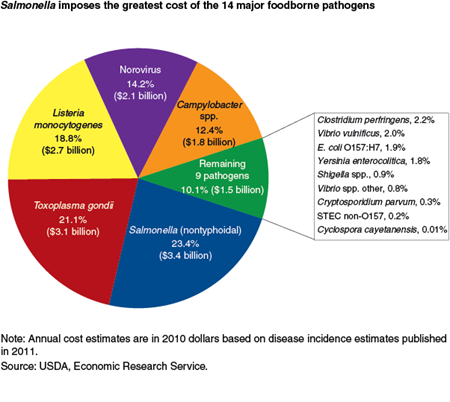