by Keith Fuglie and Nicholas Rada

Over the past 50 years, productivity growth in agriculture has enabled farmers to produce a greater abundance of food at lower real prices. Lower prices, plus rising incomes, have allowed consumers to spend a smaller share of their disposable income on food purchases. In fact, improving agricultural productivity has helped the world avoid a recurring Malthusian crisis—where the needs of a growing population outstrip the ability of humanity to supply food (see "New Evidence Points to Robust But Uneven Productivity Growth in Global Agriculture" in the September 2012 issue of Amber Waves). 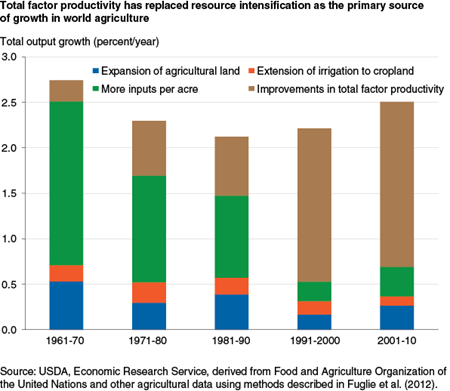 Over this 50-year timespan, the primary source of global agricultural growth changed from input-based (growth due to bringing new land into production or by intensifying the use of other inputs—labor, capital, and materials—per acre of land) to mainly TFP-based (growth due to getting more output from existing inputs). In the decades prior to 1990, most output growth came from input intensification, that is, using more labor, capital, and material inputs per acre of agricultural land. Over the last two decades, however, the rate of input intensification slowed significantly. The rate of expansion of land in global agricultural has also gradually slowed. What has enabled agricultural output to continue to grow despite this slowdown in the growth of agricultural inputs is rising TFP—getting more output from existing resources. In the most recent decade (2001-10), improvements in TFP accounted for more than three-quarters of the total growth in agricultural output worldwide.

ERS estimates suggest that the acceleration of global TFP growth in recent decades is largely due to better performance in developing countries and the transition economies of the former Soviet Union and Eastern Europe. Long-term investments in agricultural research and policy and institutional reforms have enabled many developing and transition countries to improve their agricultural productivity. However, a large number of countries, especially in Sub-Saharan Africa, have yet to join the “growth club”: their rates of agricultural TFP growth remain significantly below the global average. Interestingly, in developed countries, total inputs employed in agriculture are falling even as output continues to rise. The improvement in productivity has been high enough to offset the decline in input use so that output has continued to grow.

ERS data also show that within these broad developed, transitional, and developing economy groupings, productivity varies widely among countries. For example, while recent productivity growth in East and South Asia has been impressive (particularly in China and Indonesia), TFP growth has been lethargic in some other parts of Asia. Sub-Saharan Africa faces perhaps the biggest challenge in achieving sustained, long-term productivity growth in agriculture. Over the last decade, the region averaged around 1 percent TFP growth annually yet is projected to have the world's highest population growth rates in coming decades. While a few African countries have raised their agricultural TFP growth to over 2 percent per year, some that appear to be experiencing rapid TFP growth (like Angola) are simply recovering from earlier decades when their agricultural sectors suffered from the effects of war. 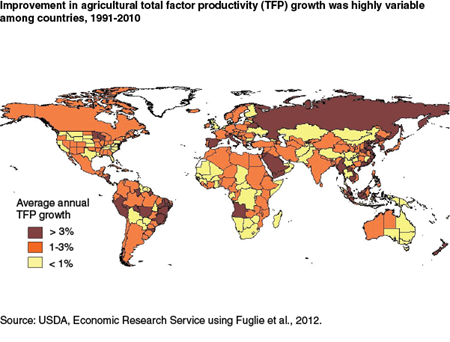