Afghanistan is among the world’s largest importers of flour. Although flour production in Afghanistan increased rapidly in the post-2000 period, it could not keep pace with rising domestic demand spurred by strong economic growth and a rapidly expanding population that depends on flour for over half of its caloric intake. With such large imports of flour, Afghanistan stands in contrast to the international norm. Globally, wheat grain is more heavily traded than wheat flour. Flour tends to face more restrictive trade policies, and its shorter shelf life poses logistical and transport challenges for importers. But in Afghanistan, flour accounts for approximately 74 percent of total wheat imports (2009/10-2010/11 average).

Afghanistan's flour imports averaged 1.6 million metric tons (MMT) in 2009/10-2010/11. Afghanistan imports flour and wheat from a number of neighboring countries, with Pakistan and Kazakhstan being the leading suppliers. With a shared border of 1,600 kilometers and a long history as a trading partner, Pakistan is Afghanistan’s top supplier.

Flour milling, Afghanistan’s largest official agro-industry, has been hard hit by the destructive effects of military conflict and political instability in recent decades. Flour producers in Afghanistan typically face highly variable domestic wheat supplies and unreliable supplies of electricity. The milling industry has been slow to rebuild due to competition from imported flour, much of it from neighboring Pakistan, where wheat producers and flour millers benefit from Government support. In addition, Afghanistan’s official trade policies place flour producers at a disadvantage. The country’s 10-percent wheat tariff tends to raise operating costs for millers. In contrast, the flour tariff is only 5 percent.

Higher tariffs on imported flour are seen as one way to improve the viability of Afghanistan’s flour producing sector. Higher tariff levels, however, to the extent they are enforceable along the country’s rugged borders, may lead to higher prices for consumers. Free trade, entailing unhindered imports of flour and wheat, could enable Afghanistan to benefit more fully from Pakistan’s relatively abundant supplies of wheat and flour. The overall gains from free trade would be modest—Afghanistan’s tariffs are already low. However, unrestricted imports could foster stronger growth in Afghan flour production without relying on increased border protections that are difficult to enforce. Millers would receive lower prices for their flour with the elimination of the 5-percent flour tariff, but they would derive greater benefits from the removal of the 10-percent wheat tariff. Eliminating the wheat tariff could lead to relatively small losses in domestic wheat output, and consumers would benefit from lower flour prices. 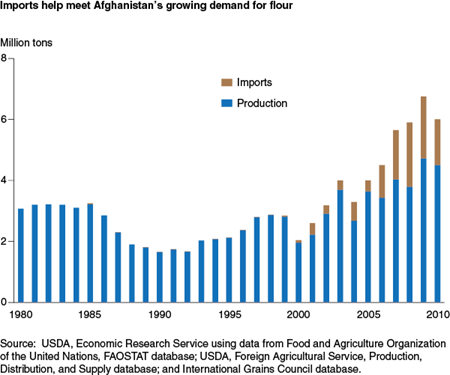