Why Do Indian Mangoes Cost So Much?

by Peyton Ferrier and Maurice Landes

In the modern, global marketplace, distance and origin have become less of an obstacle to international trade in fruits and vegetables. Rising incomes and specific preferences for goods among immigrant populations have boosted demand for niche goods typically supplied by ethnic grocery stores and often selling at substantial premiums. Wholesale prices of Indian mangoes, for example, are five to six times higher in the U.S. than prices of varieties from Mexico and Brazil. Many attribute the high prices of such products to the costs of meeting U.S. health and food safety requirements for imports. Despite recent regulatory changes designed to ease access of U.S. imports of certain specialty crops, concerns remain that regulatory and treatment costs inhibit growth of developing country exports. ERS analysis, however, finds that in the case of Indian mangoes, shipping and wholesale markups are in fact the biggest factor behind the high prices.

India is the largest global producer and exporter of mangoes. As a tropical, developing country, it enjoys the advantages of low labor costs and a favorable climate. Its mangoes are particularly well regarded for their quality. Imports of fresh Indian mangoes in the U.S. were not permitted until 2006, when a program was established to irradiate imported mangoes to control for a potentially invasive seed-burrowing insect pest. At that time, U.S. regulators expedited the import approval process and expanded the available treatments to include irradiation. Indian mangoes were one of the first goods to be imported under an irradiation program, leading to expectations that prices would fall with the increased trade.

Persistently high prices of Indian mangoes from 2006 to 2011, however, suggest that some other structural factor kept prices high. Irradiation did add to costs, and these costs might be reduced with further regulatory liberalization. But the period was also marked by high shipping costs and high wholesale markups associated with the still small volume of trade.

To evaluate the value to domestic consumers of the adoption of further measures to facilitate imports, ERS researchers decomposed the U.S. wholesale price of Indian mangoes (averaging $4.20 per pound) into its component costs, including the Indian farm cost (29 cents per pound), irradiation costs (14 cents per pound), inspection costs (35 cents per pound), air freight costs ($1.24 per pound), and U.S. wholesaler costs and margins ($1.88 per pound). Costs associated with the regulation and treatment of Indian mangoes account for a much smaller share of total costs than air freight or wholesale costs and markups. Severe reductions in the regulatory and treatment costs associated with Indian mango imports would bring less downward pressure on prices than innovations in shipping or changes in market structure that would reduce markups. 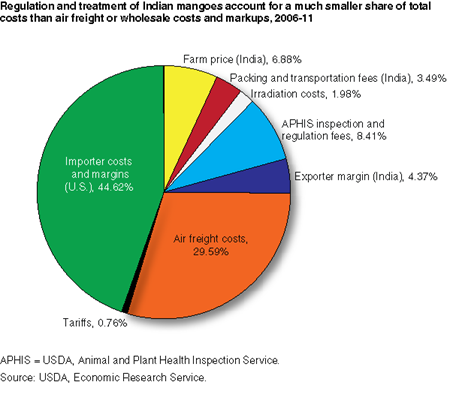