by Keith Fuglie and Nicholas Rada

Productivity growth in agriculture is a driver of economic development and poverty reduction in low-income countries. Some of the lowest levels of agricultural land and labor productivity in the world are found in Sub-Saharan Africa. As a consequence, this region suffers from high rates of extreme poverty and food insecurity (unless otherwise noted, Sub-Saharan Africa, or SSA, refers to the 48 independent nations that lie south of the Sahara Desert, except South Africa, which is excluded here since much of its agricultural system mirrors that of a developed country). Boosting agricultural productivity in the region would not only raise the income of farm households--which make up over half the region’s population--but would also lower food costs for the nonfarm population, which spends most of its income on food. This would also promote broader economic growth by stimulating demand for nonfarm goods and services, creating a surplus for public and private investment, saving foreign exchange, and freeing resources, such as labor, for the growth of nonfarm economic sectors. Through these mechanisms, improving agricultural productivity in Sub-Saharan Africa is an important strategy for creating inclusive economic development and reducing extreme poverty. 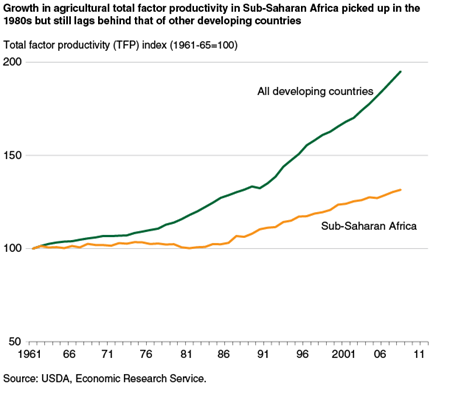 In some SSA countries, agricultural productivity growth was spurred by local and global investments in agricultural research and development (R&D) that have helped deliver improved technologies to farmers. These technologies include improved crop varieties, biological control of insect pests, control of livestock diseases, and better methods of natural resources management. By 2005, these new technologies had improved productivity on at least 25 percent of the region’s cropland. These adoption rates, however, remain far below those of other developing countries, where most crops are now grown using varieties that are being improved continually. 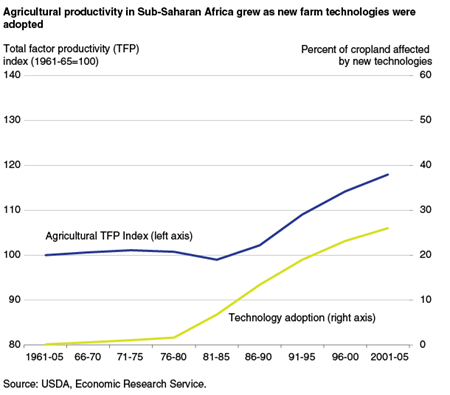 Many of the new technologies adopted by farmers in SSA came from research conducted by the 15 international agricultural research centers that make up the CGIAR Consortium (formerly, the Consultative Group on International Agricultural Research). The first CGIAR center began operating in SSA in 1970 and by 2011, CGIAR was investing over $300 million annually (in current dollars)--about half of its total global research funding--in Sub-Saharan Africa. The research centers focus heavily on raising small-holding productivity of food staples, as well as working to improve ruminant livestock production, natural resource management, aquaculture, and forestry.

In addition to CGIAR, nearly all SSA countries have established national agricultural research systems, many dating from colonial times. These systems conduct research on food crops and livestock, as well as on export crops like cocoa, cotton, and coffee, but their performance level is highly variable. Investments by SSA governments in agricultural research stagnated in the 1980s and 1990s, and the quality of many national systems has deteriorated over time. Overall, these systems remain seriously underfunded, and only a small proportion of their staff hold advanced scientific degrees. Since 2001, however, spending on national agricultural research in the region has risen, reaching $576 million in 2008, but this growth has been concentrated in just a few countries, namely Nigeria, Ghana, Tanzania, and Uganda. 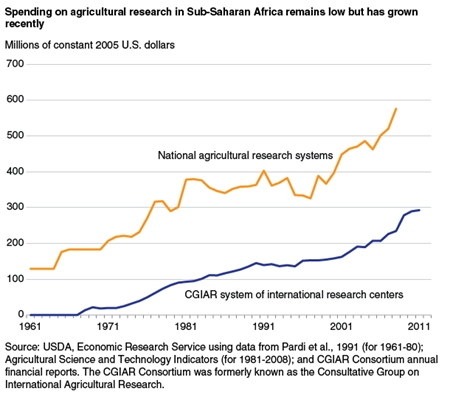 Closely related to investments in research is public support for farmer education and agricultural extension. These “human capital” investments help farmers learn about and use new technology to its best advantage. While comprehensive evidence of trends in agricultural extension capacity in the region is not available, in many SSA countries, extension services are poorly funded and do not reach many farmers. Educational achievement of farmers is also low but has slowly improved over time. By 2005, about 60 percent of SSA’s adult population had at least obtained basic literacy skills. African countries where farmers have more schooling have seen more rapid uptake of new agricultural technology.

Policy reforms that have improved economic incentives for farmers appear to have contributed to higher agricultural productivity in some SSA countries. Since the mid-1980s, several African countries have enacted “structural adjustment” reforms that improved the terms of trade for agriculture. These reforms have included freeing up agricultural markets, reducing export and import taxes, revaluing exchange rates, and, in some cases, reducing subsidies for energy and fertilizer. The net effect of these reforms can be estimated by the World Bank’s “nominal rate of assistance,” or NRA, which compares farm prices under current policy to prices without the policy interventions in place. The World Bank estimates that for SSA countries, on average, the NRA improved from a negative 21 percent in 1980 (meaning policies reduced farm prices by 21 percent) to a negative 11 percent by 2004. In other words, the structural adjustment reforms reduced, but did not eliminate, net taxation of agriculture. With stronger economic incentives and freer markets, farmers tend to invest more in agriculture and allocate resources more efficiently. Countries that reduced policy distortions that were unfavorable to agriculture saw more widespread adoption of new technologies and more rapid productivity growth.

While agricultural research, farmer education, and policy reforms have helped raise agricultural productivity in SSA, other factors have constrained it. Onfarm investment in land improvement, such as irrigation, soil conservation, and fertility, remains very low in Sub-Saharan Africa, and natural resource degradation poses a significant risk to agriculture in the region. Many farmers in the region lack secure property rights over land or access to formal credit systems. This discourages investments in land improvement because such investments can involve large upfront costs while the benefits are only realized gradually over time. Moreover, despite policy reforms, many countries in the region continue to heavily tax agriculture.

In addition, many SSA countries have experienced episodes of significant armed conflict. These conflicts can disrupt economic activity, destroy farm assets, and displace large segments of the population. The Uppsala Conflict Data Program estimates that between 1977 and 2005, an average of 11 SSA countries experienced significant armed conflict per year. A gradual reduction in regional conflicts (from 16 countries in 1998 to 8 in 2010) has improved the prospect for raising agricultural productivity in the affected countries.

Another factor constraining agriculture has been the health status of much of the region’s population. Illness and poor health not only reduce the ability of stricken individuals to work but also affect caregivers living in the same households. Since 1980, the HIV/AIDS virus has posed a significant threat to human health on the African continent. By 2000, HIV/AIDS had infected about 5 percent of the adult population in SSA and as much as 25 percent in some countries. The spread of HIV/AIDS reduced agricultural productivity by at least 2 percent for the SSA region as a whole. In recent years, the Global Fund to Fight AIDS, Tuberculosis, and Malaria has expanded access to antiretroviral AIDS therapies in Africa, and some of this productivity loss may have been recovered.

Prospects for the future

One of the first initiatives launched by the African Union after its founding in 2002 (replacing the earlier pan-African organization, the Organization of African Unity) was a new policy framework that emphasized the social and economic development of the continent. Recognizing a critical role for agriculture in economic development, poverty reduction, and food security, the African Union called for increasing public and private investments in agriculture and raising the agricultural growth rate to at least 6 percent per year. Significant support for this initiative has come from the international community. In 2009, G8 countries committed $20 billion (including $3.5 billion from the United States) to support sustainable agricultural development in the world’s poorest regions, including Sub-Saharan Africa. Other more recent sources of support for African agriculture include the G20 countries (Brazil, China, and India among them) and private charitable organizations, especially the Bill and Melinda Gates Foundation.

For resource-based growth--the sum of new land, labor, capital, and materials employed in agriculture--it may be possible to increase the present growth rate of about 2 percent per year to some extent. The United Nations Food and Agriculture Organization projects that agricultural labor in SSA will continue to grow by about 2 percent annually for the next several decades, about the same rate as the region’s population (which is expected to double between 2010 and 2050). Cropland and livestock herds can be expected to continue to grow by at least this rate until relatively high population density is reached (which has already occurred in some areas, like southeast Nigeria and Africa’s central highlands). Total input use in agriculture would accelerate, however, if more modern inputs were adopted, such as irrigation equipment, synthetic fertilizers, and farm machinery. If combined with appropriate resource management practices, higher use of these inputs could allow sustainable intensification of land use. Possibly, such intensification could raise resource-based output growth to as much as 3 percent per year over the next several decades. But raising farm investment in inputs would likely require stronger economic incentives to farmers, improved access to product markets, and other measures. 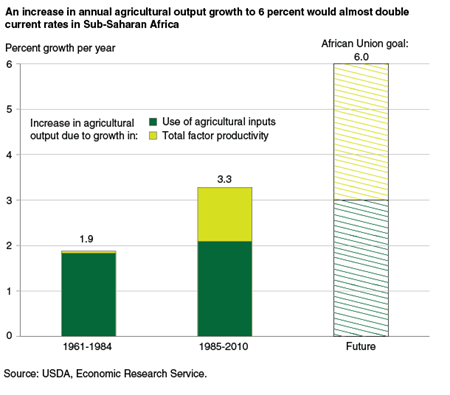 Under this scenario, productivity-based growth would have to account for the other 3 percent of output growth needed to reach the African Union’s target. This would require tripling the rate of agricultural TFP growth achieved in the region between 1980 and 2010. In fact, sustaining a 3-percent annual growth rate in TFP over several decades would require SSA countries to match rates achieved by some of the best-performing developing countries, such as Brazil and China, that have historically invested much more heavily than SSA in agricultural research and rural services.

Based on the response of African agriculture to research investments, policy reforms, and other factors over the past 35 years, ERS has estimated the impact on the region’s agricultural productivity of a select group of potential policy adjustments. Doubling research spending, further reforming economic policies, expanding rural education, ending armed conflicts, and providing antiretroviral HIV/AIDS therapies to all in need, taken together, could add as much as 20 percent to average agricultural productivity in SSA over the next one or two decades. However, this would still likely fall far short of the African Union’s goal of raising agricultural output growth to 6 percent per year.

A particular challenge to achieving rapid development and dissemination of productivity-enhancing technology in SSA agriculture is the “small-country problem.” While a large country like Brazil can operate an efficient system of national agricultural research and extension, with one common framework for regulating, approving, and scaling up technology dissemination, in SSA, the process would need to be repeated in each of the region’s 48 countries. That significantly raises the costs, and reduces the returns, to both public and private investments in agricultural research and innovation. The African Union’s initiative calls for SSA countries to strengthen their economic and research coordination, including enabling more cross-country technology transfer (by recognizing regulatory approvals of new varieties or other technologies by neighboring countries, for example). Yet few countries in SSA have fully adopted such practices. And, so far, most SSA countries lack adequate regulatory protocols for assessing and approving genetically modified crops. These factors have stymied the development and diffusion of agricultural technologies capable of addressing the many pest, disease, and environmental problems holding back crop and livestock yields in the region. Raising agricultural productivity in SSA to meet the needs of the region’s rapidly rising population, reduce the region’s poverty, and stimulate broad-based economic growth may be among the most significant challenges facing the global food and agricultural system.