Disability Is an Important Risk Factor for Food Insecurity

by Alisha Coleman-Jensen and Mark Nord

Disability generally refers to a medical condition or health impairment that limits participation in usual roles or activities. In 2010, 21.3 percent of the U.S. population age 15 and older reported having a disability. ERS researchers used questions from the U.S. Census Bureau’s monthly Current Population Survey to identify two groups of households with working-age (ages 18-64) adults who have disabilities: those not in the labor force due to a disability and those with other reported disabilities that are not necessarily work limiting (see box, “What Types of Disabilities Are Identified?”). People with disabilities who are unable to work due to their disability may be more severely disabled or have poorer health than people whose disabilities are not keeping them out of the workforce.

Food insecurity, besides being more likely in households affected by disabilities, may also be more problematic for those households. A number of studies have shown that food insecurity has negative effects on health and diet quality, and these effects may be greater for people with disabilities. Disabling or chronic health conditions may be exacerbated by insufficient food or a low-quality diet. 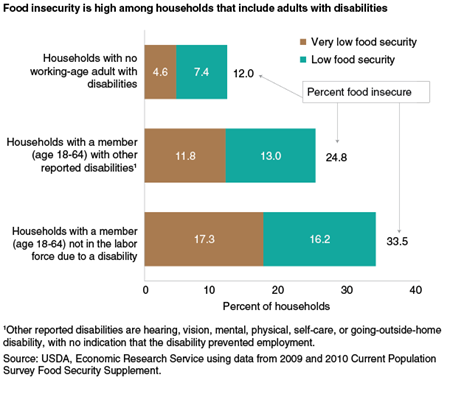 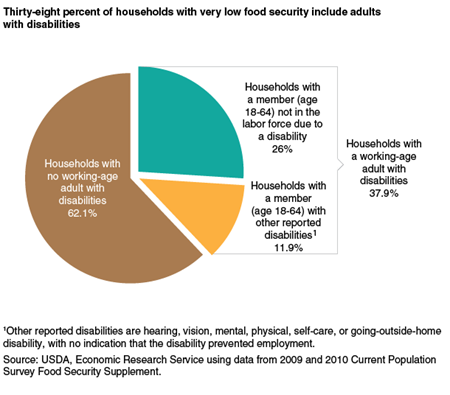 Food Insecurity High Even in Moderate-Income Households Affected by Disabilities 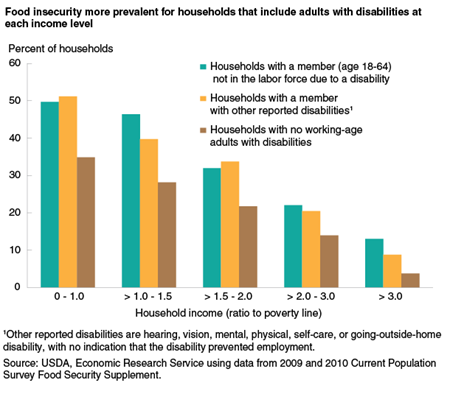 USDA’s Supplemental Nutrition Assistance Program (SNAP) includes special provisions for people with disabilities. In determining eligibility and benefit allotments, SNAP gives special consideration to those with a disability that receive government assistance for their disability. (For SNAP purposes, a person is defined as having a disability if he or she receives disability benefits such as SSI or SSDI.) One such provision allows households with members who have a disability to deduct medical expenses that exceed $35 per month from household income in determining SNAP eligibility and benefit allotments. This provision effectively increases the monthly SNAP benefit for those with disabilities and high medical expenses.

Improving Food Security for Those With Disabilities

This research shows that disability assistance programs and food and nutrition assistance programs, in their current form, do not fully protect adults with disabilities from food insecurity. These individuals may benefit from closer program coordination and program revisions to improve their food security status. For example, future research may show that the special circumstances of individuals with disabilities require assistance beyond increased resources for food to meet their needs. People with disabilities may have difficulty managing food resources, getting to a store, and shopping and preparing healthy meals on their own, even if the size of their SNAP benefit is adequate.

What Types of Disabilities Are Identified?

The following six types of specified disabilities are identified:

In addition to the six types of specified disabilities, adults in this study were classified by whether or not they were unable to work due to disability:

Not in the labor force due to a disability: