It has long been a common practice for farmers to vary the crops grown on each field from year to year in some systematic way. This rotation of crops often has important production benefits, such as improving soil nutrients by incorporating nitrogen-fixing crops like soybeans, or improving soil organic matter by planting high-residue crops such as sorghum or many grasses. Rotating crops may also help to disrupt the lifecycle of crop pests, reducing the need for annual pesticide applications. Conservation crop rotations, particularly those rotations that incorporate cover crops, are production systems that are planned to also produce important environmental benefits such as reduced soil erosion, increased carbon sequestration, improved wildlife habitat, or improved water quality.

The majority of cropland in the U.S. is farmed using crop rotations. Based on recent data from USDA’s Agricultural Resource Management Survey (ARMS), only about 18 percent of cropland planted to corn in 2010 was in corn continuously over the previous 3 years. For wheat, the numbers are similar--about 14 percent of spring wheat acreage in 2009 was in wheat continuously over the previous 3 years. For soybeans, continuous cropping is less common. In 2006, about 6 percent of soybean acreage had been planted to soybeans continuously for at least 3 years. Based on ARMS data spanning 1996-2010, a 2-year rotation of corn and soybeans is one of the most widely adopted crop rotations, accounting for the majority of corn and soybean acreage. But farmers also use many other rotation systems, with wheat being the most common “other” crop included in rotations with corn and soybeans.

While 82 to 94 percent of most crops are grown in some sort of rotation, conservation crop rotations that incorporate cover crops remain rare. Only about 3 to 7 percent of farms use cover crops in rotations, and, since these operations do not put all of their land into cover crops, only 1 percent of cropland acreage uses cover crops. Further research could help identify the types of incentives that may be needed to promote wider adoption of cover crop rotations.

Research on crop rotations, and cover crops, frequently looks at crop production only. However, it is known that integrated crop-livestock operations often combine foraging and crop production on the same fields. Survey data indicate that between 11 and 26 percent of planted acreage for corn, barley, winter wheat, and sorghum is foraged by livestock following harvest. Based on these corn and wheat adoption levels, cropland foraging following harvest occurs on at least 20 million acres. Since post-harvest foraging of fields may be an obstacle to cover crop seeding and growth, the current scale of cropland foraging could be an important constraint on the ability of farms to expand cover crop adoption. 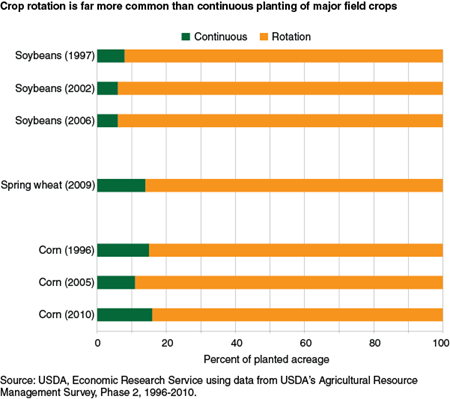