by Jennifer Ifft and Kevin Patrick

The two main measures of farm sector income are currently expected to be close to record highs in 2013. Net farm income is forecast to be $128.2 billion, which would be nearly 14 percent higher than its 2012 forecast. Adjusting for inflation, this would be the highest net farm income since 1973. Net cash income, forecast at $123.5 billion, would be down nearly 9 percent from 2012 but still high by historical standards. The different trajectories for net farm income and net cash income are mainly due to expectations of substantial increases in the value of corn inventories during the year. Value of inventory change is included in net farm income but only affects net cash income when inventories are sold. The value of corn inventories is expected to rise based on projections of average corn yields and historic corn-acreage levels.

Longer term trends in farm production and expenses are also driving changes in the farm sector’s balance sheet. Farm sector equity is forecast to reach $2.45 trillion in 2013, a new record high, as the value of farm assets is expected to increase faster than farm debt. The growth in the value of farm assets is being driven by a projected 7.5-percent increase in real estate values. Farm sector debt is expected to rise 3 percent in 2013. The net effect of these changes is that the farm sector’s debt-to-asset and debt-to-equity ratios are forecast to reach their lowest levels on record. Low levels of these ratios indicate that the farm sector has a greater ability to handle income shocks. 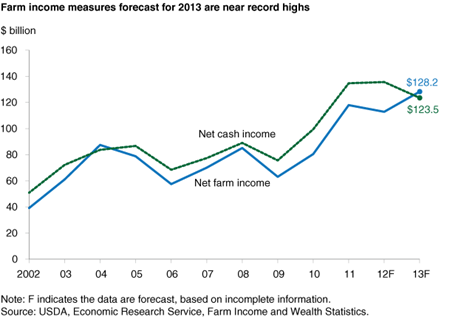