Food Insecurity Increased in Most States From 2001 to 2011

As the 2007-09 Great Recession and its accompanying higher unemployment took its toll on U.S. families, food insecurity at the national level increased. In 2011, 14.9 percent of U.S. households were food insecure—up from 10.7 percent in 2001. Food-insecure households are those that were, at times, unable to provide adequate food for one or more household members due to insufficient money or other resources for food. States differed both in the percentage of households that were food insecure and in the change in that prevalence rate during the period. Changes in food security may signal worsening or improving economic conditions in a State or shifts in the composition of a State’s population.

For the remaining 41 States and Washington, DC, the percentage of households that were food insecure grew over the decade. States with large increases in food insecurity, however, were not necessarily those with high rates of food insecurity in 2009-11. Among the six States with the greatest increases in food-insecurity rates over the last decade, only Arkansas and Alabama had rates higher than the national average in 2009-11 (19.2 and 18.2 percent, respectively). The other four—Kentucky, Missouri, Ohio, and Rhode Island—had rates near the national average in 2009-11.

Food-insecurity rates differ across States due both to the characteristics of their populations and to State-level economic conditions. Households with low incomes, low education levels of adult members, single-parent household heads, adults with a disability, or adults who are unemployed are more likely to be food insecure. Similarly, States with larger shares of households with these characteristics are likely to have higher prevalence rates of food insecurity. State-level economic conditions such as average wage, cost of rental housing, unemployment rate, residential instability, high tax burden on low-income households, and participation in food and nutrition assistance programs can also affect the prevalence of food insecurity in the State. Although not studied empirically, changes in the characteristics of State populations and State-level economic conditions may account for changes in State food-insecurity rates over the last decade. 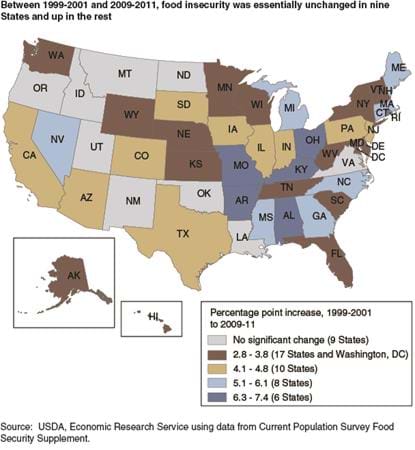