World raw sugar prices have been mostly above U.S. legislatively set price support levels since 2009 and are forecast by the Organisation for Economic Co-Operation and Development to remain above these levels through 2021—a reversal of historical patterns. The implication of this shift is that U.S. raw sugar prices will now vary with world prices, making domestic price support less relevant. With the world raw sugar price serving as the new floor for domestic prices, it becomes more important to understand the dynamics of world prices.

Developments in Brazil play an increasing role in influencing long-term trends in world sugar prices. Because Brazil is the world’s largest sugar producer (averaging over 20 percent of global production between 2006 and 2011) and largest sugar exporter (over 40 percent, same time period), events there that affect its sugar production are transmitted into the world sugar market. Although Brazil is consistently rated among the world’s least-cost producers of sugar, fluctuations in the exchange rate between the U.S. dollar and the Brazilian real have had a strong impact on its production costs when expressed in U.S. dollars. ERS analysis reveals a long-term relationship between dollar-denominated Brazilian production costs and world prices. Since 2003/04, the value of the real has been rising, contributing to a 316-percent increase in nominal world sugar prices between 2003/04 and 2011/12.

World sugar prices also vary with year-to-year shifts in world sugar supplies from surplus to deficit or vice versa. The effect of these changes can be tempered by the amount of sugar being held in stocks. Findings suggest that low stockholding magnifies the impact of a surplus or deficit effect on world sugar prices, while higher stockholding has the opposite effect.

Prices encapsulate the range of expectations on supply and use, but market uncertainty can also play a role in sugar pricing. Analysis results indicate that sugar prices tend to rise when unanticipated sugar deficits—measured by differences between initial forecasts and final marketing year outcomes—led to higher prices in preceding marketing years. The opposite holds for unanticipated sugar surpluses. The world sugar market seemingly factors in a penalty for past errors in forecasting sugar surplus/deficits. 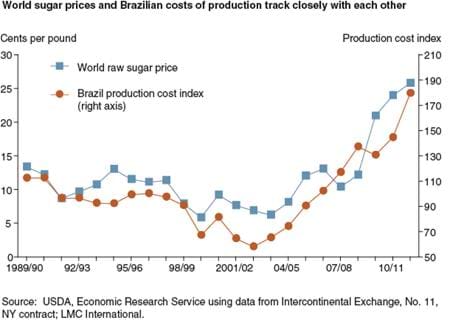