by Ron Durst and James Williamson

The Federal tax code has long been used further various economic and social policy objectives. While special tax provisions have resulted in reduced income tax liabilities for many taxpayers, they have added complexity and raised questions regarding the efficiency and fairness of the current income tax code. This increased awareness has raised interest in comprehensive tax reform. Several proposals—including a report by the co-chairs of the National Commission on Fiscal Responsibility, a bipartisan panel created to address the fiscal stability of the United States—call for fundamental reform of the Federal income tax system. The primary elements common to many reform proposals—eliminating tax preferences (exclusions, deductions, and credits), restructuring capital gains and dividend tax rates, lowering marginal tax rates, and reducing the number of tax brackets—could have a significant impact on the after-tax income and well-being of farm households.

The Primary Objectives of Tax Reform

The impetus to reform the income tax system is the desire to make the tax system simpler to administer and comply with, more efficient, and more equitable. Proponents of reform argue that the current system with its multitude of tax preferences is needlessly complicated, distorts economic decisions, and is unfair. They call for “broadening the tax base,” a term used to describe treating more income as taxable by eliminating special tax provisions. While the specifics of the various reform proposals vary, most share two common elements—lower marginal income tax rates and reduced income exclusions, deductions, and credits (provisions that effectively narrow the tax base or shield income from tax). These base broadening changes include:

Comprehensive individual income tax reform that involves many of these tax preferences would affect nearly all taxpayers, including farmers. For many, the lower marginal tax rates would offset the loss of various tax preferences, resulting in little change or even lower income tax liability. However, consistent with the goal of a fairer tax code, those farmers and other taxpayers receiving the greatest benefit from the current income tax structure could face higher taxes under comprehensive reform.

Since 1980, farm sole proprietors, in the aggregate, have reported negative net farm income for tax purposes, and over the last decade, both the share of farmers reporting losses and the amount of losses reported have increased even as farm sector income has hit historic highs. In 2010, the latest year for which complete data are available, Internal Revenue Service (IRS) data show that nearly three of every four farm sole proprietors reported a farm loss. For those who reported a loss, the average loss was $18,079, for a total of $24 billion in losses. The remaining farms reported an average farm profit of $21,030, for a total profit of $12.3 billion. Since only about 60 percent of those reporting a farm profit owed any Federal income taxes, only about 19 percent of farm sole proprietors paid any Federal income tax on their Schedule F farm income. About half of all farm partnerships and small business corporations also report farm losses.

Since farm households are typically taxed under the individual tax system, and for many the farm business currently shelters income from taxation, efforts to broaden the individual income tax base and limit business deductions could have a significant effect on the tax liability and after tax income of farm households. In recent years, average farm household income has exceeded the income for all U.S. households—in 2010, the average adjusted gross income reported by farm sole proprietors was nearly 50 percent higher than the average for all taxpayers. As a result, farm households are more likely to be affected by limits on itemized deductions and less likely to be affected by changes to tax credits targeting low-income taxpayers. Nonetheless, there is a great deal of variability among farm households regarding sources and level of income and use of specific tax provisions. Those operating larger farms are more likely to be sensitive to business investment-related tax provisions and those operating smaller farms are more likely to mirror other above-average income households in the taxpaying population. 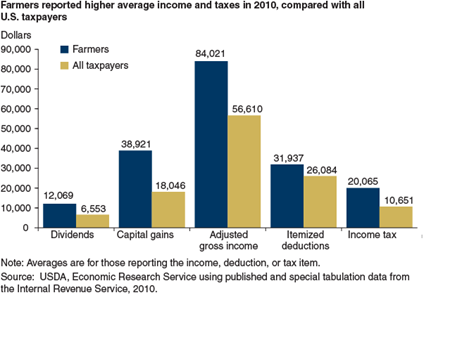 A common theme of tax reform proposals is to equalize the treatment of various sources of income, including capital gains. For most taxpayers, the current tax rate on capital gains is 15 percent (0 percent for taxpayers in the 15-percent-or-lower income tax brackets and 18.8, 20.0, or 23.8 percent for certain high-income taxpayers). This lower rate is especially significant for farmers because some assets used in farming or ranching are eligible for capital gains treatment and the amount of capital gains is increased by the ability to deduct certain business expenses from taxable income. One source of such gains is the proceeds from the sale of livestock held for draft, breeding, dairy, or sporting purposes.

If capital gains were taxed at rates equal to ordinary income tax rates, a significant number of farmers would likely face higher tax liabilities even if ordinary income tax rates were reduced. Higher tax rates on capital gains may cause some farmers to postpone the sale of appreciated capital assets, such as farmland, and instead pass the assets to the next generation as part of their estate or hold assets longer than otherwise planned. This could reduce the supply of land available for purchase by beginning farmers or other farmers looking to expand their operations.

While nearly all of the farm household income from nonfarm sources and most farm business income are taxed under the individual income tax structure, this does not imply that reform of the corporate tax structure would have no impact on agriculture. Like the individual income tax, corporate income is currently subject to a graduated rate structure. Some tax reform proposals have recommended replacing the graduated corporate tax rate structure with one single rate falling somewhere between the current 15- to 39-percent range in marginal tax rates. The current tax rate on the first $50,000 of taxable income is only 15 percent. With half of all farm corporations reporting farm business receipts of less than $100,000, any net income for these corporations is currently taxed at less than would likely apply if a single tax rate was adopted (assuming roughly the same aggregate amount of corporate tax revenue was collected under either tax rate structure). Thus, replacing the graduated rate structure with a single rate could result in a shift of the tax burden from larger to smaller corporations. Smaller farm corporations could not only lose deductions as corporate tax provisions are eliminated but also could face a higher tax rate on their expanded income tax base if the current rate structure is replaced with a single rate.

Corporate tax reform could also eliminate or reduce various business tax preferences, including accelerated capital cost recovery provisions, the deduction for U.S. manufacturers, and the self-employment health insurance deduction. Changes to these business tax provisions as part of corporate tax reform would also have a significant impact on the farm business income and income tax liability of sole proprietors, partners, and other farm businesses taxed under the individual income tax structure.

Farming requires large investments in machinery, equipment, and other depreciable capital. Under the current tax system, such costs may be treated as a current expense or depreciated over time, both of which lower taxable income in the year they are used. The amount that can be expensed is subject to a dollar limit, and investments above the limit must be depreciated over a specified recovery period, generally 7 years for farm machinery and equipment. In 2010, farmers reported a total of $29 billion in capital purchases, and, on average, those making investments made over $32,000 in capital purchases. Forty-three percent of all farms made a capital investment in 2010, but the percentage varies by farm size. Eighty-three percent of farms with at least $500,000 in annual sales reported such investments, while only 36.5 percent of farms with annual sales under $100,000 made a capital investment.

The tax treatment of these investments is of considerable importance to the farm sector, especially for larger farms (those making over $250,000 in sales annually). Over the last decade, the amount that a farmer could immediately expense has been increased to encourage investment and provide tax relief to small businesses. Currently, farmers and other small businesses are allowed to expense up to $500,000 each year in capital purchases.

In addition to expensing, farmers and other businesses have been allowed to take an additional first-year depreciation deduction on any investment above the expensing limit. Currently, the additional first-year depreciation is 50 percent but is scheduled to expire in 2014. Combined with the expensing amount, the ability to accelerate depreciation has meant that much of the capital purchases made during the past decade have been completely deducted from taxable income in the first year.

The impact of tax reform on depreciation expenses will depend on how the expensing and depreciation provisions change. As well as increasing the cost of capital investment, lowering or eliminating the expensing and additional first-year depreciation amounts could significantly increase farm taxable income. Currently, only about 18 percent of all farms report investing more than the prior 2012 expensing limit of $139,000 while only a little over 1 percent invest more than the revised 2012 and 2013 limit of $500,000. The maximum expensing amount is scheduled to revert to $25,000 in 2014. While less than 20 percent of small farms (those making under $250,000 in sales annually) invest more than $25,000, nearly 55 percent of large farms invested more than that amount in 2010. Thus, large farms would be affected the most by tax reform that eliminates or substantially reduces the expensing and accelerated depreciation provisions. 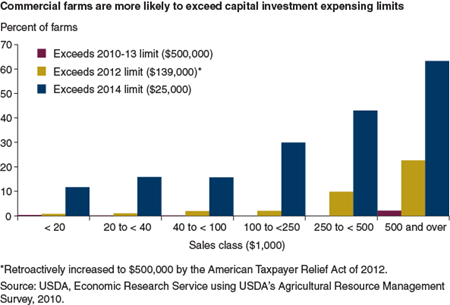 Other Provisions of Significance to Larger Farms

One of the most important business changes in the American Jobs Creation Act of 2004 was a new deduction for U.S. manufacturers, which was defined to include farmers. About 7 percent of farm sole proprietors—mostly larger farms—benefited from this provision, with an average deduction of $8,926 for eligible farm households.

Since 2003, farmers and other self-employed taxpayers have been allowed to deduct 100 percent of the cost of providing health insurance for themselves and their families as long as they are not eligible for an employer-sponsored plan. The deduction is limited to the amount of the taxpayer’s income from self-employment, so it only benefits farm households reporting farm profits. About one out of seven farmers claims the self-employed health insurance deduction in any given year. In 2010, farm sole proprietors deducted an average of $6,173 for a total of $1.7 billion in health insurance premiums.

In summary, if tax reform is designed to be revenue neutral—neither increasing nor decreasing the total amount of tax revenues collected by the Federal Government—some taxpayers who currently benefit from special tax provisions could see their tax liabilities increase. This group may include a significant number of farm households, with those operating larger farms most likely to be affected. On the other hand, those who receive little or no benefit from current deductions, exclusions, and credits could see little change or even lower tax payments with fundamental tax reform. This group could include low- to moderate-income farm households operating smaller farms.