The Relationship Between Food Insecurity, Conflict, and Food Price Shocks in Afghanistan

by Anna D'Souza and Dean Jolliffe

Food insecurity can be a serious issue in conflict-afflicted countries, where food production and distribution networks are strained and distributing emergency food aid can be a challenge. In such countries, economic shocks such as food price spikes can have further harmful effects on already vulnerable populations.

ERS and World Bank researchers recently used nationally representative household survey data (collected by the Government of Afghanistan) and confidential geo-coded violence data (collected by the United Nations Department of Safety and Security) to investigate the relationship between conflict (fatalities, injuries, and violent incidents) and household food security (calories and the value of food consumed) in Afghanistan. They also examined the implications of a spike in staple food prices for Afghan household food security.

However, after taking into consideration several key household factors (such as asset values, rurality, and household head characteristics), and the prices of important food products (such as wheat flour, vegetable oil, milk, and lamb) and kerosene (cooking fuel), researchers found robust evidence that conflict and household food security are negatively correlated (consistent with the literature describing a harmful cycle between the two).

In 2008, the price of wheat flour, the dietary staple, doubled in Afghanistan due to a confluence of factors including drought, export bans in key trading partner nations, and spikes in global food prices, potentially compounding the impact of the conflict on food security. Researchers found that households in provinces with higher levels of conflict experienced muted declines in food security relative to households in provinces with lower levels of conflict, holding all other factors constant. This finding is consistent with the likelihood that households in conflict-afflicted areas may be more disconnected from markets, and thus be less affected by price spikes, than those in non-conflict-afflicted areas.

A better understanding of the linkages between conflict and food insecurity and their spatial distribution can help inform policymakers interested in targeting scarce resources to vulnerable populations, such as through the placement of strategic grain reserves or targeted food assistance programs. Such interventions are of particular importance during periods of high food prices, when the food security situation is more precarious. 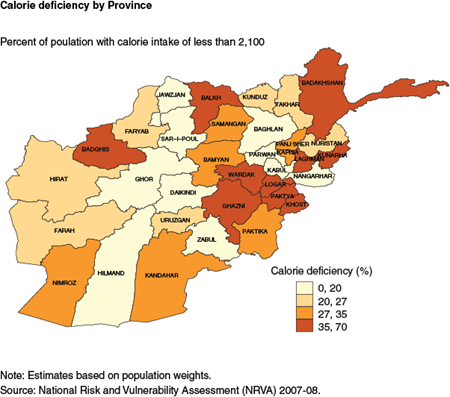