by Stacy Sneeringer and Thomas Hertz

Large-scale livestock operations have contributed to the sector’s productivity growth over recent decades but have met with opposition in many communities. In addition to aesthetic concerns, opponents cite a growing body of research that finds negative effects of such operations on public health, the environment, and property values. On the other hand, proponents emphasize the importance of large-scale hog production to regional employment, income, and tax revenues. Some communities have encouraged the entry of these operations via tax breaks, welcoming legislation, and less stringent environmental regulations.

ERS researchers recently used data from the U.S. census of agriculture and the Regional Economic Information System to estimate the effects of increases in the number of hogs at large-scale operations on local employment. “Large-scale” is defined as an operation having 2,500 or more hogs in inventory. The research focused on nonmetropolitan counties, of which 40 percent had one or more large-scale hog facilities at some point during the period studied (1992-2007).

Findings show that each additional 1,000 hogs in inventory at large-scale operations generated 0.57 additional jobs on these operations. However, this increase in hogs at large-scale operations was also correlated with 0.04 fewer jobs on smaller hog farms, perhaps due to large-scale hog farms replacing smaller farms. The increase in large-scale hog production is also correlated with 0.16 fewer jobs on local nonhog agricultural operations, which may reflect large hog farms’ heavy reliance on nonlocal sources of feed as well as the use of fewer inputs per unit of output. Another 0.59 jobs per 1,000-hog increase are estimated to have been generated in the local county’s nonfarm economy, largely in wage and salary employment. The total estimated local employment impact of hog farming is thus on the order of 0.96 jobs per each additional 1,000 hogs in inventory.

For counties with large-scale hog operations, the average change in the number of hogs at these operations over each 5-year period between 1992 and 2007 was 8,473. Thus, an average-sized 5-year increase in the number of hogs at large-scale facilities generated an estimated 8.1 net new jobs in counties with such facilities based on ERS estimates—3.1 new jobs (net of losses) in the agricultural sector and 5.0 additional nonfarm jobs. While growth in large-scale hog farms did result in local employment gains within counties with such facilities, holding other factors constant, the employment impacts were found to be much smaller than those projected by other studies. 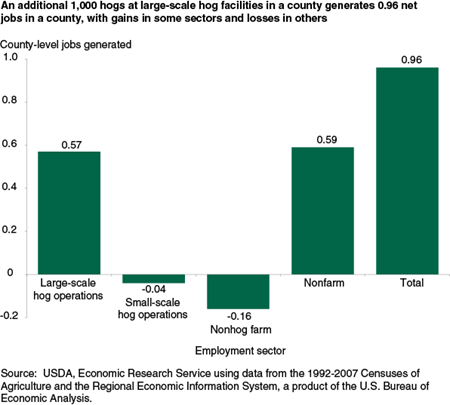