Beginning with the 2012-13 school year, schools participating in USDA’s National School Lunch Program (NSLP) must follow a new set of nutrition standards. The new standards require schools to increase servings of fruits, vegetables, whole grains, and fat-free or low-fat milk; reduce levels of sodium and trans fat; and meet the nutritional needs of schoolchildren within their calorie requirements. Schools that comply with the new standards will receive an additional 6 cents per meal from USDA for lunch reimbursements. ERS researchers analyzed cost data in a national sample of nearly 400 schools in 2005 to better understand the potential effects of the new standards on school food costs. Schools serving lunches in 2005 that would have met the new fruit, vegetable, and milk standards had higher food costs than schools whose menus would not have met the requirements. In contrast, schools serving lunches with fewer calories or with less starchy vegetables had lower food costs than other schools.

The study was based on two nationally representative surveys. One was used to examine the nutritional content of the lunch items (School Nutrition Dietary Assessment Data III) and the other was used to assess food costs (School Lunch and Breakfast Cost Study II). Researchers controlled for characteristics such as region, urbanicity, size of the lunch program, purchasing policies, and other factors that could influence food costs.

Because some schools from the 2005 sample met the new standards and others did not, researchers were able to examine how food costs varied among these school types. The most commonly met standards were those for fruit and milk: 46 percent of the 397 schools in the 2005 dataset met the fruit standard and 77 percent met the milk standard. More than a quarter of schools met the standard for dark green vegetables (26 percent) and orange vegetables (29 percent) each week, and 15 percent met the standard for legumes.

Among the schools analyzed, food costs averaged $1.04 per lunch in 2005. School lunch menus that would have met the new, combined weekly requirements for dark green vegetables, orange vegetables, other vegetables (not including starchy ones), low-fat/fat-free milk, and fruit in 2005 averaged 9 cents more in food costs per meal than menus of other schools. It is important to note that this analysis is based on the proposed, and not the final, nutrition standards published by USDA in early 2012. As such, some cost reductions achieved through policy changes from the proposed to final rule are not reflected here. Still, the new requirement to serve more and different kinds of vegetables appears to be the main driver of higher estimated food costs. Some evidence also suggests that the new calorie limits may lead to lower food costs. Labor and capital costs, which were not available for analysis, would be needed for a full assessment of the cost for schools to meet the new nutrition standards. 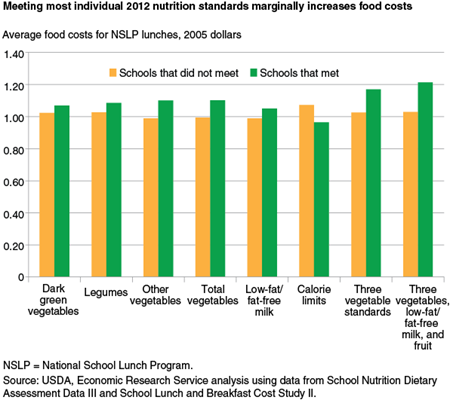