Over the last 20 years, wheat production in Afghanistan grew 3.5 percent per year, driven primarily by yield increases of nearly 2 percent per year. Afghanistan's success in recent years at achieving higher wheat output stands in sharp contrast to that of the 1980s, when yields contracted at an annual rate of 1.3 percent. Afghanistan's rapid post-1990 yield growth is attributed to long-term efforts at developing and disseminating high-yielding seeds through the support of international organizations. These productivity advances also demonstrate that seed and fertilizer markets in Afghanistan have continued to function, despite significant disruptions. Nevertheless, wheat production in Afghanistan has not kept pace with demand, furthering the country's dependence on imports of its key staple food and major crop.

Although yields reached record highs under favorable weather conditions, wheat production in Afghanistan is extremely sensitive to variations in precipitation. During the main growing period (April to September), rainfall is scarce and farmers depend on irrigation. And decades of war and conflict have left much of the country's irrigation system in a state of disrepair. These conditions limit growth in wheat area, which, in turn, limits growth in output. The country's irrigated area is only about half its potential of 5 million hectares (1 hectare = 2.47 acres), and large areas of Afghanistan are still planted with traditional, low-yielding wheat seeds. Improvements to irrigation systems and wider use of higher yielding seeds could help to boost Afghan wheat output.

Even if Afghanistan sustains recent growth in wheat production, the country is likely to grow increasingly reliant on wheat imports. Wheat consumption in Afghanistan is expected to exceed 8 million tons per year by 2020. To close the gap between domestic supply and demand, yields on both rainfed and irrigated areas would have to rise, and almost two-thirds of the country's wheat area would have to be irrigated. Large-scale investments in Afghanistan's irrigation system may require the country to enter into agreements with downstream neighboring countries that obtain water from the Helmand, Kabul, and Amu Darya rivers if increased water use in Afghanistan reduces supplies downstream. Given the difficulties associated with expanding the country's irrigated area, imports of wheat, primarily from Pakistan, will continue to enable Afghanistan to compensate for domestic constraints on water availability. 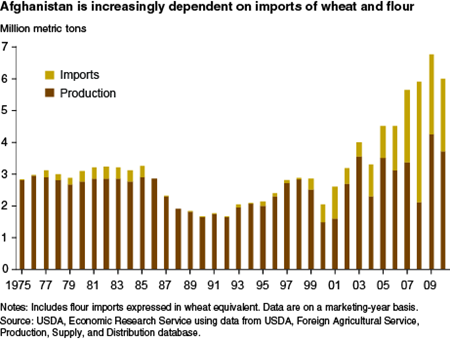