Mexico Emerges as an Exporter of Beef to the United States

by Rachel Johnson and Amy Hagerman

Mexico has historically been a top export market for U.S. beef, but in 2003, it emerged as an important source of beef imports for the United States. U.S. beef imports from Mexico at least doubled in 2010 and 2011. In 2011, Mexico exported 59,000 metric tons of beef to the U.S., making it the fourth largest exporter of beef to the United States. The volume of boneless, fresh, or frozen meat cuts exported from Mexico to the U.S. increased by nearly 68 percent from 2010 to 2011, while the volume of exports of Mexican bone-in beef cuts increased by nearly 59 percent. Exports to the U.S. market are vital to the Mexican beef sector, and in 2011 they reached $325 million, or 61 percent of the value of all Mexican beef exports during the period.

The increase in exports of Mexican beef to the United States is partly due to an increase in the number of TIF (Tipo Inspeccion Federal) plants inspected by Mexico's Federal Government. Such plants must meet standards similar to those in the United States. Meat that is moved across State borders in Mexico or exported to the U.S. must be inspected at the Federal level. In the last 60 years, the number of operational TIF establishments increased from 15 to 365 across 27 States in Mexico. The growth of TIF plants has been particularly rapid in the last few years.

Mexico has also increased its production of grain-fed beef, the quality and type of beef that is most preferred by U.S. consumers. Increasing numbers of cattle are being fed through semi-intensive and intensive feedlot operations, boosting the supply of grain-fed beef available for export. In addition, feed consumption of coarse grains in Mexico has trended up over the last two decades, as has the volume of distillers' dried grains (DDGs) exported to Mexico. DDGs are a byproduct of ethanol production and are used as feed for livestock. Increased DDG exports to Mexico have supported the expanding Mexican beef production and feedlot industry.

The Mexican beef industry continues to improve its infrastructure and marketing channels but still faces challenges in competing with domestic crop production for inputs, feed sources, forage, and land. The effects of recent changes in cattle feeding and slaughter should increase Mexico's potential to grow as a supplier of beef to the United States. 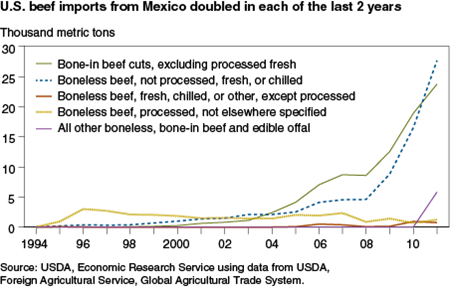