In the Long Run: Public Expenditures Stable at Around 6 Percent of Total Food Spending Since 1990

The local, State, and Federal government share of total U.S. food spending increased steadily from 1.1 percent in 1940 to 5.0 percent in 1980. Much of the increase between 1960 and 1980 is attributed to the establishment of the permanent Food Stamp Program in 1964 (now called the Supplemental Nutrition Assistance Program, or SNAP), expansion of the National School Lunch Program in 1966, and introduction of the Special Supplemental Nutrition Program for Women, Infants, and Children (WIC) in 1974. In the last three decades, the government share has stabilized, reaching 6.1 percent in 2010. The value of food grown by farmers and households for their own consumption fell from 18.7 percent of total U.S. food spending in 1940 to 1.7 percent in 2010. In 2010, families and individuals accounted for 82.8 percent of the $1.2 trillion in total U.S. food spending. 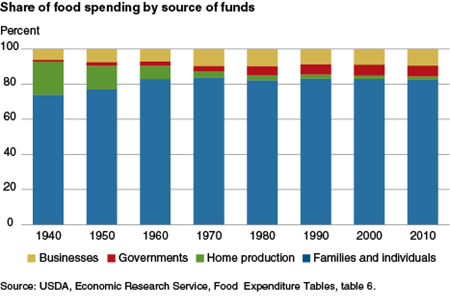