by Glenn Schaible and Marcel Aillery

Irrigated agriculture makes a substantial contribution to the value of U.S. agricultural production. In 2007 (the most recent year for which data are available), it accounted for 55 percent of the total value of U.S. crop sales (including fruit and vegetable production) while also supporting the livestock and poultry sectors. During the same period, roughly 57 million acres, or 7.5 percent of total U.S. cropland and pastureland, were irrigated. The continued contribution of irrigated agriculture--which accounts for 80-90 percent of the Nation's consumptive water use--depends on the availability of adequate freshwater supplies. And these supplies are subject to increasing demands for water to support population and economic growth, Native American water-right claims, environmental flows (for wetlands, rivers, and groundwater systems that maintain natural ecosystems), and energy-sector expansion. In addition, projected climate change impacts are expected to reduce water supplies and increase water demand, particularly across the Western U.S. The economic health and sustainability of irrigated agriculture will depend on the ability of producers to adapt to growing constraints on water, particularly through improved water-use efficiency.

Since the 1970s, irrigated agriculture has made a substantial and sustained shift away from traditional gravity-fed and flood-based systems to using more efficient gravity and pressure/sprinkler-based systems. Nevertheless, significant room for improvement in farm irrigation efficiency still exists. At least half of U.S. irrigated cropland acreage is still irrigated with traditional (less efficient) application systems. According to USDA Farm and Ranch Irrigation Survey data, fewer than 10 percent of irrigators make use of the more efficient onfarm water management practices, such as soil- or plant-moisture sensing devices, commercial irrigation-scheduling services, or computer-based simulation models, to evaluate crop irrigation requirements. These practices can help farmers make informed decisions on when to irrigate and how much water to use, maximizing the economic efficiency of irrigation systems and freeing up water for other uses. In addition, integrating onfarm irrigation efficiency improvements with other practices, such as deficit irrigation, acreage idling, and voluntary off-farm water transfers that compensate for water conservation gains, may also enable producers to balance potential production declines due to reduced water use with improved profitability through reduced irrigation costs. 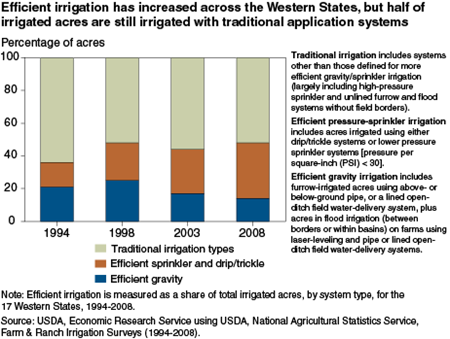