by Andrea Carlson and Elizabeth Frazão

ERS researchers measured the prices of over 4,000 foods using three price metrics: price per 100 calories, price per 100 edible grams, and price per average portion. Price per edible gram is the price of a food after it has been cooked and the seeds, peels, skins, shells, and bones have been removed. Price per average portion is the price of the average amount consumed by adults who reported consuming the food in a national survey.

Each of the 4,000 foods was assigned to one of the food groups found at ChooseMyPlate.gov (grains, dairy, fruits, vegetables, or protein foods) or to the 'less healthy' food category. Less healthy foods were defined as those high in sodium, added sugars, or saturated fats, or that contain small to zero amounts of the food groups. Foods in this category included many canned and dry soups, fruit-flavored yogurt, and sodas. 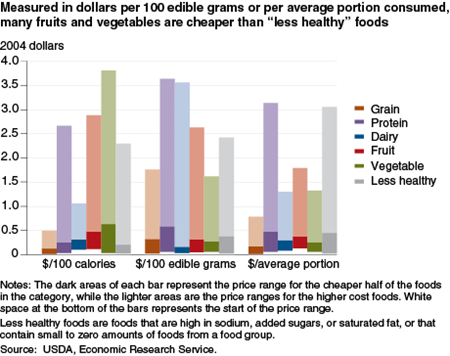 Are Healthy Foods Really More Expensive? It Depends on How You Measure the Price, by Andrea Carlson and Elizabeth Frazão, USDA, Economic Research Service, May 2012