by Stacey Rosen and Shahla Shapouri

In recent years, the gross domestic product in Sub-Saharan Africa (SSA) has grown 5 to 6 percent per year, in real terms. This growth is among the highest in the world. In most countries in the region, even food and agricultural production has grown on a per capita basis, an outcome that seemed unreachable a decade ago. Long-term projections by ERS point to a decrease in the share of the population in SSA that is food insecure, despite an increase in the number of food-insecure people. These projections depend on whether growth trends in these countries can be maintained. Will recent progress continue, and if not, what are the implications for food security in the region?

At the aggregate level, both the number of food-insecure people (those consuming less than 2,100 calories per day) in SSA and the distribution food gap are projected to rise over the next decade. The distribution gap, which takes into account unequal purchasing power within countries, measures the amount of food needed to raise food consumption in each income decile to the nutritional target of approximately 2,100 calories per person per day. Both of these indicators are expected to increase at a slower rate than population growth. The region's population growth is among the highest in the world, projected at roughly 2.8 percent per year through 2022.

Domestic Grain Production Is the Key Determinant of Food Security

Though food imports are increasing in most SSA countries, the region relies mainly on domestic production for the bulk of its food consumption. More than 80 percent of the region's grain supply comes from domestic production, which remains the key to its food security situation. Between 1980 and 2000, grain production, an indicator of food production, kept pace with population growth. Between 2000 and 2010, however, growth in grain production accelerated to 4.1 percent per year, equivalent to a 1.6-percent annual growth rate in per capita terms. During that same period, 27 of the 39 SSA countries included in ERS's International Food Security Assessment, 2012-22, achieved positive growth in per capita grain production; in 18 countries, these growth rates surpassed 2 percent. These growth rates represent significant improvements over the prior two decades.

With the rise of food prices in 2008 and the limited progress in improving global food security, development of Sub-Saharan Africa's agricultural sector is at the center of policy discussions. While substantial advances have been made in this area over the last few decades, challenges remain in the lower income countries. Inadequate resources, physical and human, limit technical and economic opportunities. Population growth also presents a challenge. Providing adequate food for growing populations requires at least a comparable increase in food availability, if not a higher increase, to allow for unequal purchasing power within countries and to enable improvements in diets. 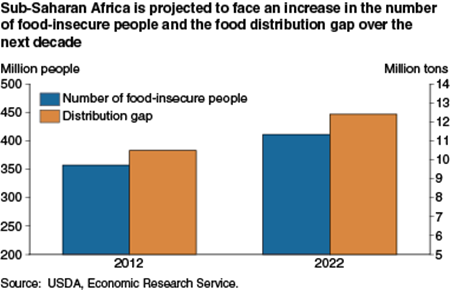 Improvements to agricultural performance and food security in Sub-Saharan Africa are now among the top items on development and political agendas. Under the Comprehensive African Agricultural Development Program (CAADP), a country-led initiative that began in 2003, more than 20 African countries have adopted national investment plans devoting 10 percent of their budgets to agriculture. This initiative is strongly supported by donor countries. In 2008, L'Aquila G-8 summit donors pledged $22 billion over 3 years to invest in agriculture and food security. This high-level commitment was reaffirmed during the 2012 G-8 Summit in the United States with the announcement of the New Alliance for Food Security and Nutrition.

These initiatives all recognize that increased domestic food production and more robust agricultural productivity in the region are critical to long-term food security. For many Sub-Saharan Africa countries, low yields and lagging labor productivity in agriculture present opportunities for significant improvement.

In 2008-2010, 15 of the 39 countries reported average grain yields of less than 1 ton per hectare (1 hectare = 2.47 acres). Ethiopia, Madagascar, Malawi, and Zambia had the highest average yields during the period, around 2 tons per hectare, while Cape Verde, Namibia, Niger, and Somalia had the lowest, less than half a ton per hectare. Interestingly, among the countries in the region with the highest growth in grain production--ranging from nearly 6 percent to more than 13 percent per year--some had yields of less than 1 ton per hectare (Angola, Chad, Eritrea, Gambia, Mauritania, and Niger). Given that their production growth was principally due to area expansion, investments to improve yields may be increasingly important to sustain growth.

The low and/or declining yields in the region stem partly from a lack of access to quality resources (http://www.cid.harvard.edu/archive/events/cidneudc/papers/rosenvincent.pdf ). Inputs and new technologies--such as fertilizer, machinery, and irrigation technology--are costly and are not widely used in many developing countries. The development and dissemination of new technologies and farm practices that maximize yield potential for a particular area will depend on that area's ability to make needed investments and the willingness of farmers to improve their skills and adopt the provided technologies. The effectiveness of technology adoption, in turn, depends on land characteristics, such as soil quality and access to water, as well as a farmer's land tenure, income, wealth, and access to credit.

Fertilizer is an important yield-enhancing input. Fertilizer consumption in the SSA region averaged roughly 11 kilograms per hectare of arable land during 2006-08. The world average was nearly 123 kilograms. The consumption levels in SSA were low even by developing country standards, as low-income countries worldwide averaged more than 19 kilograms. Among the factors contributing to low fertilizer use are cost, lack of access to credit, and for importing countries, foreign exchange constraints

Still, the effectiveness of fertilizer use is compromised in many developing countries by the conditions and environment in which the fertilizer is applied. Fertilizer use is most productive on irrigated or moist areas. Many low-income countries in semi-arid climates are dependent on rainfall for the proper amount and timing of moisture. In the SSA countries for which data were available, only about 1 percent of area was irrigated in 2005-07.

Agriculture continues to employ the largest share of the labor force in the lower income countries surveyed. In Ethiopia, for example, agriculture's share of total employment was about 80 percent in 2007. Most of the poor in the region live in rural areas, so any growth in labor productivity has the potential to boost rural incomes, thus reducing poverty and food insecurity in the most vulnerable countries.

Agricultural value added per worker (AVAW, 3-year average for the most recent data available since 2000, at constant 2000 US$) for 34 SSA countries was $318. This is less than a third of the world average of roughly $1,000 over the same period. The low AVAW translates to less than $1 per day. In 21 of the 34 countries, AVAW was less than $360 per year. Among the countries, Cote d'Ivoire and Sudan had the highest AVAW, and Burundi and Eritrea had the lowest.

The low level of AVAW reflects low profitability in the agricultural sector and is a key factor in rural poverty. Increasing returns to farming in SSA would require efficiency improvements at every level of the agricultural sector, from production to marketing. Modernizing agriculture would require government investment in infrastructure, education, dissemination of new technologies and inputs, and the promotion of producer marketing organizations that can link small farmers to consumers.

Public resources to help meet these needs are limited, so many SSA countries are creating a more favorable climate for private sector investment. The Grow Africa initiative, in support of CAADP, is a partnership of African governments, private sector businesses, investors, and farmers designed to accelerate investment in agriculture (http://growafrica.com/). The 2012 G-8 meetings initiated a New Alliance for Food Security and Nutrition that envisions significant new private sector investment in agriculture, especially in Africa. This agenda requires coordination across all the different dimensions of a production system. For example, investment in support of agriculture includes agricultural research and extension; infrastructure, such as rural roads; education; health care; and in some cases, irrigation and power supplies. The availability of improved crop varieties depends on the pace of agricultural research, whereas the success of these new varieties depends on their timely and equitable dissemination among farmers. And farm management must accommodate the new varieties to sustain progress. Finally, food security hinges on the development of public institutions to efficiently implement policies and monitor the effectiveness of investments.