by Nora Brooks and Birgit Meade

For this analysis, U.S. agricultural export data are broken out by their destination--high-income countries (per capita gross national income of $12,276 or more per year), middle-income (lower middle, $1,006-$3,975 per year; upper middle, $3,976-$12,275 per year), or low-income ($1,005 or less per year)--and their level of processing. U.S. agricultural imports are also broken out by their source and level of processing. ERS used trade data from the Census Bureau and grouped trade partners with respect to income according to the World Bank's classification based on per capital Gross National Income (GNI). 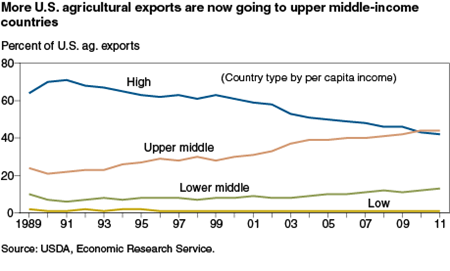 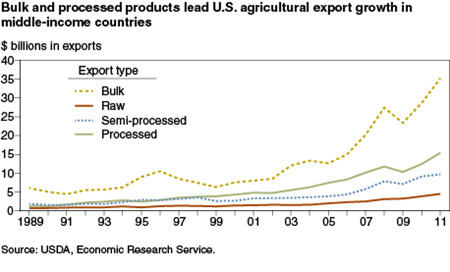 Agricultural trade was analyzed with a special focus on the products' level of processing--bulk, raw (fresh fruit and vegetables), semi-processed, and processed. ERS found that trade patterns differed depending on source or destination countries' income group. 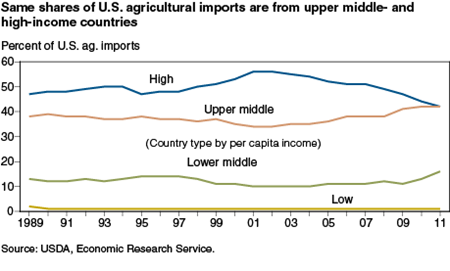 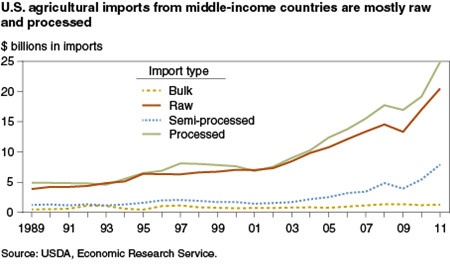 As per capita incomes grow, consumers tend to substitute higher valued foods for the staples they would normally consume. A better understanding of the kinds of products that emerging markets will demand should help inform policies designed to meet the needs of both U.S. agricultural exporters and importers.