by Constanza Valdes and Nicholas Rada

Over the last 25 years, Brazil emerged as a major agricultural producer and exporter, with agricultural production rising 77 percent between 1985 and 2006. This growth was facilitated by domestic reforms implemented in the 1980s and early 1990s that helped the country achieve economic and financial stability. That stability, as well as government investments in infrastructure and agricultural research, led to increases in agricultural productivity and expansion of cultivated area, strengthening the country's position as a competitive supplier of commodities to the world market. Since 2008, Brazil has been the world's third-largest agricultural exporter (in value terms), after the United States and the European Union.

Embrapa, the research agency linked to Brazil's Ministry of Agriculture and Food Supply, is the country's principal source of public agricultural research. For each 1-percent increase in Embrapa's cumulative research investments during the period, the productivity growth of Brazil's most efficient farms improved by 0.2 percent. Alternatively, investments in rural credit, transportation infrastructure, and primary school infrastructure boosted the productivity growth of Brazil's average farms.

Some of the innovations developed by Embrapa include new technologies to improve tropical soil conditions, which enabled cropland expansion to the acidic soils of the Cerrados, Brazil's broad savannah. Also, the development of more productive perennial grasses enabled ranchers to replace extensive production schemes in pastures of low productivity with more intensive beef and milk production systems, resulting in increases in livestock productivity and farmer income.

The TFP of Brazil's most efficient farms grew 4.4 percent annually between 1985 and 2006, indicating that these farms increased output by 138 percent over the period, while holding inputs fixed at 1985 levels. That strong growth rate includes annual productivity growth of 7.1 and 2.9 percent in the livestock and crop sectors, respectively. In contrast, the TFP of average farms in Brazil grew at a rate of 2.5 percent per year. These farms produced 93 percent of what the most efficient farms produced in 1985, but only 64 percent of what they produced in 2006. 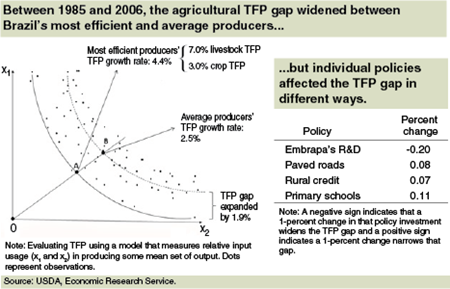