Nitrogen Management in Corn Production Appears To Be Improving

Nitrogen is a critical input in agriculture, enhancing the ability of farmers to profitably produce high yields. However, nitrogen compounds released into the environment through farming activities are a source of many environmental problems, including oxygen depletion in aquatic ecosystems, biodiversity losses, visibility-impairing haze, and global climate change.

An ERS study of nitrogen management on U.S. corn cropland over 2001-10 indicates that corn producers may be adjusting to changing economic conditions and environmental concerns. Corn is the most widely planted crop in the U.S.; it is also the largest user of nitrogen in terms of application rates per acre, total acres treated with nitrogen, and total applications of nitrogen. Over 97 percent of planted corn acres receive nitrogen (commercial and manure). Based on data from USDA's Agricultural Resource Management Survey, U.S. corn acreage treated with nitrogen increased 18 percent between 2001 and 2010 as corn prices rose by 70 percent in response to increased demand for grain for export and ethanol production.

During this 10-year period, corn acres not meeting best management practices for the rate of nitrogen applied declined from 41 to 31 percent, indicating more efficient nitrogen use. Overall, corn acres meeting all three criteria defining best nitrogen management practices increased from 28 to 34 percent between 2001 and 2010. And despite the increase in corn acres receiving nitrogen, the total number of corn acres not meeting the three criteria has declined by almost 10 percent since 2001. A combination of higher fertilizer prices, increased awareness, and concerns over environmental quality may all be contributing to this trend. 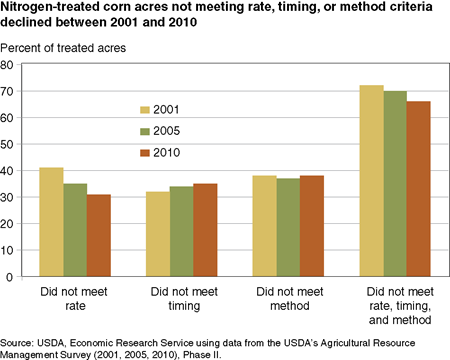