Advances in technology have improved the feasibility and profitability of extracting natural gas from rock formations like shale. Drilling companies access gas trapped in such formations, also known as unconventional gas, through hydraulic fracturing-a method of cracking rock by injecting water, sand, and chemicals under high pressure. Opponents of hydraulic fracturing claim that it can contaminate groundwater. Proponents argue that developing unconventional gas formations is needed to increase domestic energy production, and historic highs of natural gas withdrawals in the U.S. indicate that it has. Proponents also highlight the jobs created from gas development, yet no peer-reviewed studies have estimated the number of jobs created from gas extraction using actual county-level employment data.

The three Western States of Colorado, Texas, and Wyoming saw large increases in gas production in the 2000s, most of which came from unconventional sources. Not all counties in each State were close enough to the activity to benefit economically from the boom. From 1999 to 2007, counties participating in the boom saw a larger percent increase in employment, wage and salary income, and median household income and a larger decrease in the poverty rate than counties not participating.

More rigorous analysis that accounts for the effects of other factors that could have caused boom and nonboom counties to grow at different rates over the period confirms that boom counties experienced greater employment and income growth than nonboom counties, holding other factors constant. Over the 8-year expansion in gas production, boom counties in the 3 States added 1,780 jobs, on average, or 12 percent of average employment prior to the boom. These jobs were created throughout the local economy, not just in gas extraction industries, and so include the 'multiplier effect' of increased energy production.

The results capture increases in local employment and income and median household income occurring primarily in the gas development phase when infrastructure is laid and wells are drilled. The long-term local economic effects are likely smaller. Still, the estimated number of jobs added to local economies during the development phase is multiple times below that projected for the development of shale gas formations in Texas, Arkansas, Louisiana, and Pennsylvania. To the extent the employment effects would be similar across States, the comparison suggests that additional job impacts may be felt at the regional or national level, or simply that previous projections overstated the economic impacts. 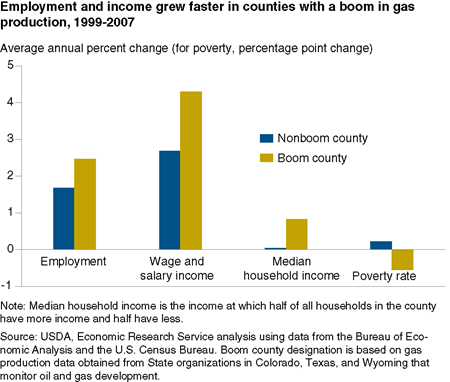