Gobbling Up Snacks: Cause or Potential Cure for Childhood Obesity?

Consumption of snacks among children has increased markedly over the last 35 years. In the late 1970s, American children consumed an average of only one snack a day. Today, they are consuming nearly three snacks per day. As a result, daily calories from children's snacks have increased by almost 200 calories over the period. Many of the snacks children consume are high-calorie, low-nutrient foods such as desserts and salty snacks. Trends in snacking, combined with larger portion sizes and more sedentary lifestyles, may be contributing to the incidence of overweight and obesity among children.

Despite its likely role in childhood obesity, snacking may provide a mechanism for addressing this obesity problem and improving diet quality. Replacing one energy-dense snack each day with a fruit or vegetable could reduce caloric intake and decrease the prevalence of overweight and obesity. For example, a child replacing 1 ounce of potato chips (150 calories) with a cup of grapes (104 calories) or a medium-sized apple (95 calories) would consume 46-55 fewer snack calories. If done on a daily basis, all else equal, this simple behavior could result in about half a pound less of body weight at the end of a month. And, replacing desserts or salty snack foods with fruits and vegetables has the added bonus of reducing a child's intake of added fats and sugars. But is this likely to increase food costs? The reality is that replacing a snack with a fruit or vegetable need not break a household's food budget.

The perception that fruits and vegetables--particularly in fresh form--are expensive is pervasive. In a 2012 survey for the Produce for Better Health Foundation, nearly two-thirds of mothers with children age 10 and younger cited cost as the most important factor when shopping for fruits and vegetables. The perceived high cost is of particular concern among lower income households.

A number of studies also claim that 'healthy' foods like fruits and vegetables cost more than other foods. All such studies use price per calorie as the basis for comparison. However, ERS researchers demonstrated that any conclusions about what types of foods are considered expensive depend on the unit in which prices are measured. Fruits and vegetables appear to be more expensive than foods high in saturated fat, added sugars, and/or sodium when prices are measured by calories but not necessarily when prices are compared using other measures. For example, when using price per average amount consumed, the researchers found that fruits and vegetables are typically less expensive than less healthy foods.

In another study, ERS researchers estimated the cost of 59 fresh and processed fruits and 94 fresh and processed vegetables after adjusting for the removal of inedible parts and cooking losses. They found that Americans on a 2,000-calorie diet could purchase the quantity and variety of both fruits and vegetables recommended in the 2010 Dietary Guidelines for Americans for between $2.00 and $2.50 per day.

What are some of the foods that a child might eat as a snack? For this analysis, 20 items were selected from among the salty snacks, baked and sweet goods, and frozen treats that children age 6-13 reported consuming in the 2005-08 National Health and Nutrition Examination Surveys (NHANES). In these surveys, participants report the types and quantities of foods that they eat over 2 nonconsecutive days. Each of the snack foods selected for analysis was commonly consumed, requires little or no preparation, and is available in grocery stores and other food retailers. Most also turned out to be high in calories, added sugars, fat, and/or sodium and are considered less healthy relative to fruits and vegetables.

Twenty fruits and vegetables in both fresh and processed forms were identified as potential replacements for snack foods. Some of these items, such as fresh apples and bananas, are already commonly consumed by children. Others are not. This may explain why, for 12 of the 20 fruits and vegetables, children who reported consuming these foods ate, on average, less than ½ cup-equivalent. (A cup-equivalent is generally the amount of edible food needed to fill a 1-cup measuring cup; 2 cups for raw leafy greens, ½ cup for dried fruit.) One-half of a cup-equivalent is similar to what the 2010 Dietary Guidelines for Americans define as a 'serving' and is also similar to the size of many fruit cups sold in supermarkets for snacks and lunch boxes.

It was particularly difficult to find vegetable options, as children tend to consume most vegetables infrequently and in small amounts, so completing the list of fruit and vegetable snacks required creative thinking. For example, sweet potatoes--although not commonly consumed by children--are easy to microwave and might appeal to children because of their sweet taste.

Retail prices for the 40 snacks vary widely. Household scanner data reveal that, in 2010, Americans paid $0.24 per pound for whole watermelon, $1.11 per pound for canned peaches, and $3.86 per pound for potato chips (see box, 'Estimating the Costs of Buying and Eating Foods'). Retail price per pound, however, is a misleading measure for assessing the impact on a household's food budget of replacing a snack food with a fruit or vegetable. First, consumers purchase and eat different amounts of various food items. Second, foods vary in their amounts of inedible parts, and some foods may gain or lose weight upon cooking. A 16-ounce bag of potato chips, for example, might provide 16 snack portions, whereas a pound of watermelon might provide 3 to 4 snack portions after removing the inedible rind. Therefore, price per portion is a better indicator of food costs.

In this analysis, a portion equals the average amount consumed per eating occasion by children age 6-13 in the 2005-08 NHANES. For the 12 fruits and vegetables currently consumed by children in small quantities, the portion size was set at one-half of a cup-equivalent, assuming children would need to replace current snacks with a 'reasonable' amount of a fruit or vegetable. In converting each food's retail price to a price per portion, adjustments were made for refuse (i.e., the watermelon rind or the peel of a banana) and for weight lost or gained when cooking (e.g., when microwaving a sweet potato). 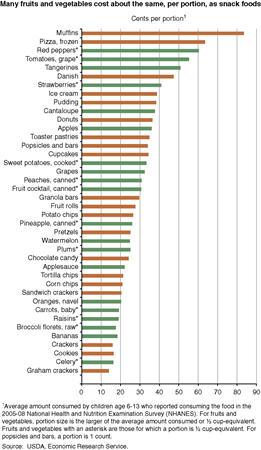 Although some substitutions can increase food costs, others can reduce or have no impact on the food budget. Most substitutions, however, reduce snack calories. For example, replacing:

Another 397 substitutions are possible using each of the 20 fruits and vegetables to replace each of the 20 snack foods, with different calorie and cost tradeoffs. Making all 400 substitutions would result in an overall reduction of $7.00 in food costs--a small amount when spread over the 13 or so months needed to make all 400 substitutions at a rate of 1 substitution a day. The net impact on calories, however, is considerable, averaging 126 fewer calories per substitution. A month of swapping snacks once a day would save 3,780 calories, which, all else equal, would translate into approximately 1 less pound of body weight.

Substituting a fruit or vegetable for another type of snack food could increase fruit and vegetable consumption and help reduce childhood obesity. The Produce for Better Health Foundation reports that most mothers are aware that their families do not consume enough fruits and vegetables and are interested in new ways to incorporate these foods into their children's diets.

Estimating the Costs of Buying and Eating Foods

Retail food prices are easily checked by most any consumer walking through the aisles of a store. Less observable is the cost of actually consuming a given food. ERS researchers studying food costs draw on various data sources to estimate average purchase prices as well as the cost of consuming specific foods.

A key source of data on retail food prices is scanner data. Nielsen Homescan data are one such source. Households participating in the Homescan consumer panel use a scanner at home to record items purchased, quantities bought, amount of money paid, and date of purchase for all retail food purchases. The 2010 data provide limited information about random-weight foods such as loose apples and store-baked muffins. Thus, purchase information is only available for foods such as prepackaged apples and muffins that are sold with a Universal Product Code (UPC), a type of bar code. The 2010 Homescan data used for this analysis is based on information from 60,648 households.

National average retail prices were calculated for this analysis by summing expenditures for each snack across all brands, flavors, and package sizes of the snack, across all stores, and over an entire year, and dividing by quantities purchased. The price of 'muffins,' for example, includes small, medium, and large blueberry, cranberry, bran, and other sizes and flavors of muffins sold with a UPC. This approach gives a greater weight to the prices of more frequently purchased flavors and sizes.

Some retail food products like potato chips and muffins can be eaten 'as is,' while others require the consumer to remove inedible parts or cook the food prior to consumption. A food's edible and retail weights are different in these cases. For example, in 2005-08, children consumed an average 5.2 edible ounces of apples. However, since 10 percent of a fresh apple is inedible, households must buy 5.8 ounces of apples at retail in order to consume 5.2 ounces. Multiplying 5.8 ounces by the average retail cost for apples ($0.99 per pound in 2010) reveals the estimated cost of eating an average portion of apples to be $0.36.

Are Healthy Foods Really More Expensive? It Depends on How You Measure the Price, by Andrea Carlson and Elizabeth Frazão, USDA, Economic Research Service, May 2012

'Can Low-Income Americans Afford To Satisfy MyPyramid Fruit and Vegetable Guidelines?', Journal of Nutrition Education and Behavior, May 2011, Vol. 43, No. 3, pp. 173-179.

A Wide Variety of Fruit and Vegetables Are Affordable for SNAP Recipients, by Andrea Carlson and Hayden Stewart, USDA, Economic Research Service, December 2011