The Concentration of Poverty Is a Growing Rural Problem

by Tracey Farrigan and Timothy Parker

While the 2001 and 2007-09 economic recessions increased the incidence of poverty throughout the Nation, perhaps more troubling was the increasing concentration of poverty over the last decade. In the United States, people living in poverty tend to be clustered in certain regions, counties, and neighborhoods rather than being spread evenly across the Nation. Research has shown that the poor living in areas where poverty is prevalent face impediments beyond those of their individual circumstances. Concentrated poverty contributes to poor housing and health conditions, higher crime and school dropout rates, as well as employment dislocations. As a result, economic conditions in very poor areas can create limited opportunities for poor residents that become self-perpetuating.

While the incidence of poverty in rural America has been widely recognized since official measures of poverty were first published in the early 1960s, the public has generally perceived concentrated poverty as being an urban, central-city problem. This urban focus grew largely out of the impacts of de-industrialization, abrupt suburbanization, and civil unrest on inner city neighborhoods in the 1960s and 1970s. Previous research often emphasized concentrated poverty as a proxy for a broader set of socioeconomic disadvantages affecting a predominantly low-income minority population in urban areas. Despite sharing similar patterns of geographic and economic isolation, minorities and other high-poverty populations in more sparsely settled rural settings are less visible than their urban counterparts. But the incidence of concentrated poverty in nonmetro areas (a working definition of “rural America”), and the burden imposed on the poor residing in those areas, is a growing problem.

ERS uses a county-based measure and data from the 2000 decennial census and the 2006-2010 American Community Survey (ACS) to highlight patterns of poverty concentration. Researchers identify new and pre-existing “high-poverty” counties—where at least 20 percent of the population have incomes below the Federal poverty threshold—and associated demographic and geographic characteristics, including the percentage of the poor that live in high-poverty counties and the extent to which the counties are spatially clustered. This is the most widely adopted approach for examining concentrated poverty in rural America (see box, 'Geographic Definitions and Data').

High Poverty Increased Nationwide, but More so for Nonmetro Areas

A Disproportionate Share of Nonmetro Minorities Are Exposed to High Poverty

An extensive body of research finds that the well-being of families and children living in high-poverty areas is undermined by a lack of access to mainstream social and economic opportunities. For example, children who grow up in high-poverty neighborhoods are less likely to succeed academically, complete high school, or attend college than those who grow up elsewhere. Research also finds that pervasive isolation characterized by social, racial, linguistic, and economic separateness from the larger economy underlies poverty concentration. While this research has primarily focused on the plight of minorities in urban neighborhoods, the relatively large share of minorities in rural areas who are exposed to high poverty implies that these problems are not uniquely urban.

While anyone living in a high-poverty area may confront the socioeconomic challenges that accompany day-to-day life to some extent, those challenges weigh most heavily on those who are themselves poor and who may have fewer options to live elsewhere. Nonmetro African American and Native American poor are at high risk of being in this situation given that more than 60 percent of these populations reside in a high-poverty county. The nonmetro poor who are foreign born, have less than a high school degree, or are female heads of families with children are also at high risk. The metro counterparts for all of these populations are less likely to be at risk given that significantly smaller shares reside in high-poverty counties.

High-poverty areas tend to be clustered into groups of contiguous counties that reflect distinct regional concentrations. This can pose special problems by taxing the resources that State and local governments can bring to bear to address poverty. The majority of nonmetro high-poverty counties and nonmetro poor are located in specific geographic areas with a long history of distressed or transitioning regional economies, many with a former dependency on natural resources and/or a largely low-skill minority population. High levels of nonmetro poverty are pervasive in the South, particularly in the Cotton Belt, Southern Appalachia, the Rio Grande, and the Mississippi Delta. Poverty rates are typically highest at the cores of these high-poverty clusters and then taper off gradually toward the edges.

There were 193 nonmetro counties newly defined as high poverty in 2006-10, compared with 55 metro counties. Most of the new nonmetro high-poverty counties are adjacent to previously existing high-poverty clusters. The majority are in the Southern Interior Uplands, the Cotton Belt, the Southern Piedmont, and the Southern Great Plains. These regions are characterized by historically high rates of poverty for rural racial/ethnic minority populations (see “Anatomy of Nonmetro High Poverty Areas” in the February 2004 issue of Amber Waves). Findings also reveal an emerging nonmetro high-poverty region in the Pacific Northwest and a more dispersed pattern of new high-poverty counties elsewhere in the West and the Midwest. This suggests that not only has the incidence of concentrated nonmetro poverty increased over the last decade but that it has also become more widespread. 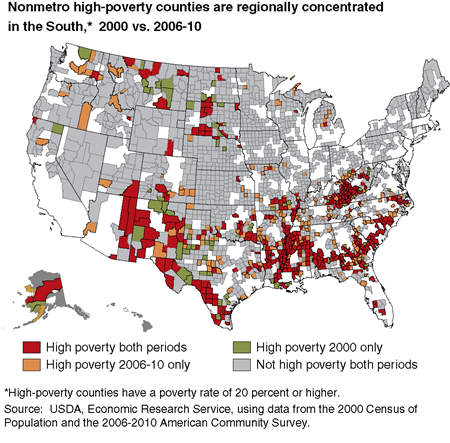 Not surprisingly, the geography of newly designated high-poverty nonmetro counties tracks closely with changes in the national economy. More than one-third of these counties were manufacturing-dependent counties in 2000, many of which experienced above-average increases in unemployment between 2000 and 2006-10 (see "On the Map" in the June 2012 issue of Amber Waves). This suggests that while the 2007-09 economic recession did not have the same effect on rural America as other recent recessions (see "Economic Recovery: Lessons Learned From Previous Recessions" in the March 2010 issue of Amber Waves), it had a pronounced effect on nonmetro poverty concentration, while also reinforcing historic regional and demographic trends.

Nonmetropolitan areas are often used as a proxy for rural America. Metropolitan (metro) and nonmetropolitan (nonmetro) areas are designated by the U.S. Office of Management and Budget (OMB). In 2003, OMB defined metro areas to include central counties with one or more urban areas together with outlying counties economically tied to the central counties as measured by work commuting. Nonmetro counties are those outside the boundaries of metro areas. Here, ERS uses the terms “nonmetro” and “rural” interchangeably.

What is the difference between ACS and decennial census data?

The American Community Survey (ACS) is an ongoing data collection effort that replaces data previously collected by the decennial census long form. Two key differences exist between the decennial census and the ACS that could affect poverty comparisons: (1) the decennial census is a point-in-time survey that measures income in the year prior to the census, whereas the ACS is a rolling survey that measures income in the last 12 months; and (2) the ACS surveys a significantly smaller sample of the U.S. population than the census. Therefore, to produce statistically reliable estimates for small geographic areas and populations, 5 years of data must be pooled. More information on making poverty comparisons using the ACS can be found on the Census website.