by Constance Newman and Dean Jolliffe

By almost all measures, household income and earnings have become more volatile over the past 40 years. The exact cause is unknown, but increased competition and deregulation in many U.S. industries, the decline of labor unions, and increases in temporary work and self-employment have been suggested. Greater year-to-year income fluctuations can affect well-being by making it harder for households to maintain a stable pattern of consumption and living expenses. While higher income households may have savings to weather periods of reduced earnings, lower income households may be less able to meet basic needs during these periods.

USDA’s food and nutrition assistance programs can be important sources of temporary help for low-income families in times of need. Income volatility, however, can lead to fluctuations in a household’s eligibility for income-based assistance programs, even over a few months. Volatility complicates the functioning of the food and nutrition assistance safety net by making it difficult for program administrators to target benefits accurately and define sensible eligibility periods.

An ERS study and research from the University of Michigan found that the lower a household’s average income, the more likely the household is to face large swings in income. Low-income groups also had the most rapid increases in volatility. The ERS study found that, during the late 1990s, changes in total household hours worked and in the share of adults working were the primary causes of changes in monthly household income.

The research from the University of Michigan found that female and Black heads of households, who are both disproportionately represented among the low-income population, had more than double the levels of income volatility of White male heads of households in 1970-2000. Income volatility was measured as year-to-year variance in household income, adjusted for the fact that people’s earnings generally rise with age. 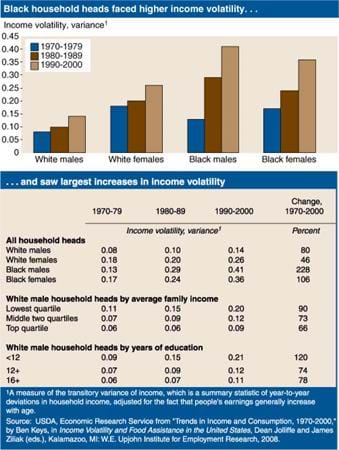 Household eligibility for nutrition assistance programs can fluctuate because of income volatility. Eligible households are certified to receive benefits for a specific time period, and the specific time periods can differ by program and by State. In the National School Lunch Program (NSLP), for example, participants are certified to receive benefits for the school year, even if household income subsequently rises after the first month of eligibility. The average certification period for the Supplemental Nutrition Assistance Program (SNAP, formerly the Food Stamp Program) was 12 months in 2007. There are some differences by State and by household type; households with earnings tend to have shorter certification periods and households with elderly members have longer ones. When the certification period is over, a household must reapply for continued benefits.

An ERS study found that among households with school-aged children in 1996-97 that were eligible for the NSLP at least once during the year, two-thirds had incomes that cycled above and below the income eligibility threshold during the school year. An estimated 27 percent of households that were income-eligible for subsidized lunches at the beginning of the 1996-97 school year were no longer income-eligible 4 months later due to monthly income changes. However, because of the 12-month certification period instituted in 2004, students in such households are now eligible for benefits. The same patterns of income volatility were found in the late 1990s and early 2000s.

Effects of Income Volatility on Participation Are Mixed

Program participation among households with volatile incomes may be affected by many factors, and research to date is mixed about the overall impact. While income volatility may encourage some households to apply for benefits, it may discourage participation by other households. If an income shortfall is likely to be short lived, a household may choose not to apply for a program despite temporary eligibility. Another household may expect to be cycling in and out of eligibility, and the prospect of short, interrupted eligibility periods may be enough to discourage them from applying.

On the other hand, research from the University of Illinois and the University of Kentucky examined changes in yearly income from 1979 to 2002 and found that SNAP participation was generally higher when income was more volatile. This result is consistent with previous findings that food stamps help to maintain basic expenditure levels in the face of rapid income declines.

A key policy question is how increased income volatility affects the design and implementation of nutrition assistance programs. A program can save payments to households whose incomes rise above the income threshold by examining eligibility at more frequent intervals. Shorter certification periods, however, entail staff time and equipment costs, as well as time and travel costs to participants.

Since the early 2000s, most State SNAP programs have moved from requiring monthly (or quarterly) income reporting to every 6 months. Most States now require a report only if household income has increased to the point of program ineligibility. Before the early 2000s, any change in income in excess of $25 had to be reported. In 2004, the eligibility period for the NSLP and School Breakfast Program was extended from a month to the whole school year, largely in response to the effect of income volatility on program eligibility.