Christmas trees are a significant source of income for farmers in many States. Evergreens most in demand as Christmas trees are native to hilly to mountainous regions with cool to cold climates, and it is more economical to produce such trees in those regions. However, Christmas trees are bulky,making transportation relatively expensive. The combination of these attributes leads to production in States with favorable climate and topography that are also near major population centers. Consequently, States in the Northeast and Northwest are the leaders in production and sales ofChristmas trees. 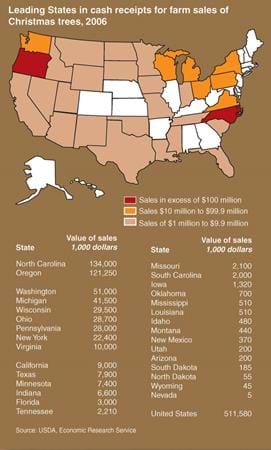 Turkeys are a staple in the American diet, but demand spikes in November and December when they are a traditional entree for holiday celebrations. In 2006, American farmers received $3.5 billion from turkey production. Transportation costs greatly influence the location of turkeyfarms. Frozen turkeys are costly to ship because they must be kept frozen from the processing plant to the consumer. This favors the location of processing plants near population centers. Live turkeys can be shipped safely only for short distances, requiring that farms be located nearprocessing plants. Turkeys consume large amounts of feed that is bulky and costly to transport. States that produce a lot of feed grains (particularly corn), such as in the Midwest, have economic advantages in turkey production. 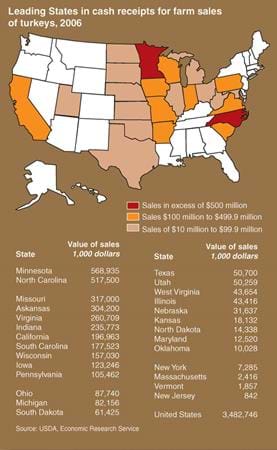