The appeal of rural areas for recreation has a long history, going back as far as colonial times, when places with restorative hot springs emerged as resorts, such as Stafford Springs, CT, and Berkeley Springs, WV. In the modern era, ease of transportation, increased leisure time, higher incomes, major government investment in State and National Parks, and the attraction of reservoir lakes have helped draw public interest in such places and make away-from-home recreation an economic driving force in many rural and small-town areas. For rural communities attempting to offset job losses from farming, mining, or manufacturing, capitalizing on the recreational appeal of an area may foster new economic development, helping retain or increase population.

Researchers from ERS and Loyola University Chicago have identified nonmetropolitan (nonmetro) counties that have a major dependence on recreational activity. Recreational dependence was determined by several measures—the share of county employment related to recreation and its accompanying businesses, the share of annual earnings income derived from the same industries, the share of housing units intended for occasional use only (second homes), and, in marginal cases, the per capita sales receipts of hotels and motels. Based on these criteria, 300 nonmetro counties—or a seventh of the U.S. total—were identified as recreation counties. 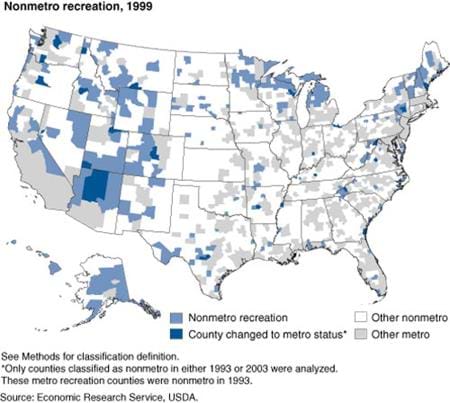 Recreation counties are found in many regions but are particularly common in the Upper Great Lakes States, the Mountain West, and upland areas of the Northeast. Typical attractions include lakes, coastal locations, skiing, fishing, or general outdoor activity and scenic beauty. Casinos, whose location may not be related to any natural amenity, have also become a feature of many recreation economies since 1990. Many recreation counties have the same qualities that attract retirees, and a number of them are also identified as retirement counties in ERS's county typology.