More people moved from metro to nonmetro areas than in the opposite direction during 2000-04. This movement, along with immigration from abroad, increased the nonmetro population by 417,000 (0.9 percent) over the period. Nonmetro net migration rates ranged from 37 percent in Flagler County, FL, to -25 percent in Loving County, TX. The highest net migration rates were close to those of urbanized areas (the built-up cores of metro areas). Most counties in the Great Plains continued to experience net outmigration. 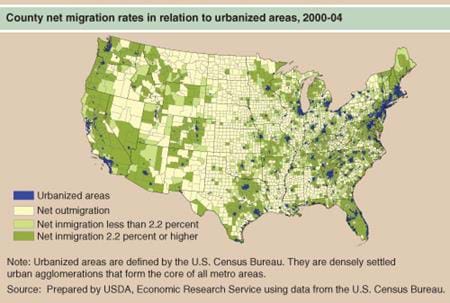