In November 2005, USDA’s Food Safety and Inspection Service (FSIS) began using a rapid, highly sensitive testing system to detect the deadly O157 strain of E. coli in raw beef. This BAX® system, based on identifying a pathogen’s DNA fragments, had already proved successful in screening for two other disease-causing microorganisms—Salmonella and Listeria—in raw and ready-to-eat meat and poultry products and pasteurized egg products. Such technological advances in the science of pathogen testing are changing the economics of food safety. The increased demand for pathogen testing that began in the early 1990s is being matched by an increased supply of sophisticated testing systems. Information provided by these tests has enabled the food industry to improve food production systems and the safety of food.

Both food companies and government regulators have recognized the need for more extensive pathogen testing. Foodborne disease outbreaks, such as the 1993 E. coli O157 outbreak that killed four children, prompted some meat retailers to demand that their suppliers meet pathogen testing requirements. In 1994, FSIS determined that any amount of E. coli O157 in ground beef adulterated the product, and, under the 1996 Pathogen Reduction/Hazard Analysis Critical Control Point systems, FSIS requires companies that produce raw meat and poultry products to test the products for generic E. coli and Salmonella.

In response to increased demand, the supply and quality of pathogen tests have changed significantly. Since 2000, modern biotechnology and bioinformatics have revolutionized the sensitivity and accuracy of pathogen tests. New tests deliver results that are more comprehensive, sensitive, and accurate in a shorter time (1-2 days instead of 3-5 days or weeks) and at lower cost. A leading U.S. testing company, Silliker, Inc., reports a threefold jump in demand for pathogen screening by North American food companies in the last decade, with DNA-based tests, such as the polymerase chain reaction (PCR) test, replacing older pathogen-culturing and immunological tests. 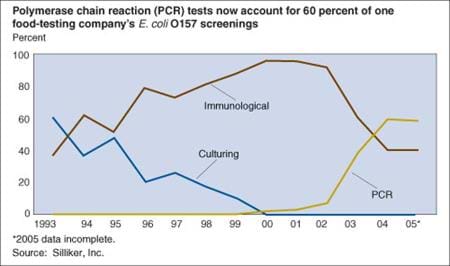 As a result of these developments in testing technologies, food companies have more information about where pathogens enter, grow, and hide in the food supply chain. These advances are in turn spurring innovation in other food safety technologies from farm to fork. With more accurate and more timely information on pathogen contamination, food producers can more easily identify the technologies that are working as well as weak spots in the safety-control system.