The food security of the Nation’s households—their consistent access to enough food for active, healthy living—declined from 2003 to 2004. Although 88 percent of U.S. households were food secure throughout the year in 2004, the percentage of households that were food insecure at least some time during the year rose from 11.2 percent in 2003 to 11.9 percent in 2004. Over the same period, the percentage that were food insecure with hunger also increased, from 3.5 to 3.9 percent. The condition “food insecure with hunger” means that, at times during the year, one or more household members were hungry because of insufficient money and other resources for food. 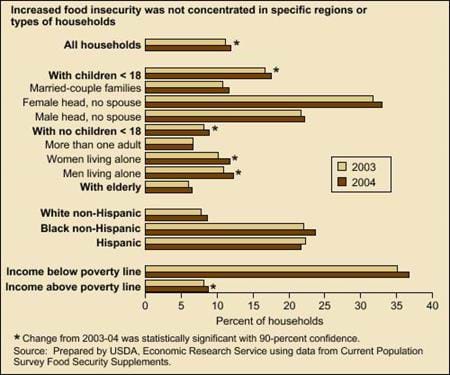