Internet on the Range

Over the last decade, the Internet has become a standard tool used in the workplace. Access to and use of the Internet has increased since the 1990s for all regions of the country, most types of workplaces, and all income groups. While many see the Internet as ubiquitous, it has not yet become universal. Rural areas lag urban areas in access to the Internet, and a gap is evident between farm and nonfarm workplaces. 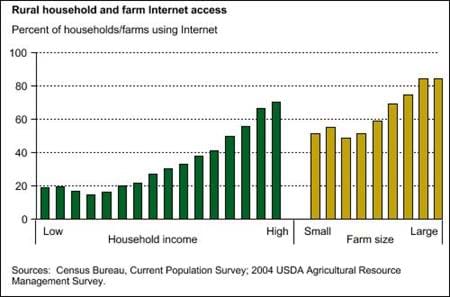 In rural areas, farms have been in the vanguard of Internet use in the workplace. According to data from USDA’s Agricultural Resource Management Survey, 56 percent of farms reported having computers with Internet access in 2004. Twenty percent of those respondents used the Internet to purchase farm-related items and 29 percent used it to purchase household items. Internet use varied somewhat by geographic location of the farm household, with farms in small towns having the lowest share with Internet access. Differences in Internet use among farm households by farm sales, however, were striking. Internet use ranged from 49 percent for farms with sales of $10,000 to $19,999 to 84 percent for the largest farms (gross sales of $500,000 or more). The largest farms also had the highest share of individuals using the Internet to make both farm and household purchases, mirroring the pattern of all U.S. households.